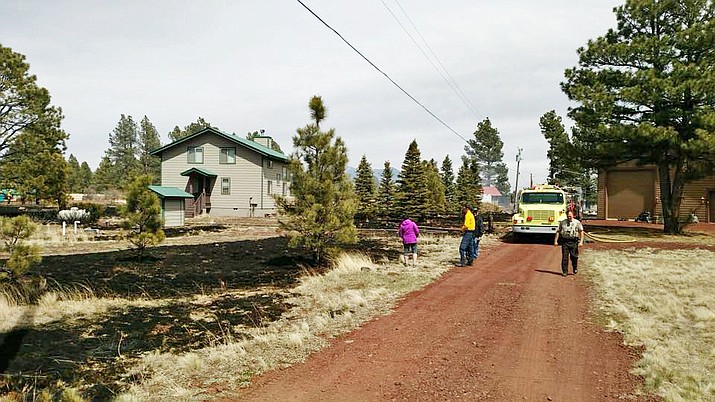 What homeowners can do

According to the USFS Homeowner’s Firewise Guide, residents can protect their homes with several simple steps:

Homeowners in the Mountain View Acres and Forrest Ranch subdivisions north of Parks were on high alert April 19 when a quick moving wildfire spread through the area and came within feet of neighborhood homes.

According to Ponderosa Fire District Chief Lee Antonides, firefighters were able to control the fire within 20 minutes of arrival despite strong winds.

The National Weather Service in Bellemont reported peak wind gusts of 49 mph in Williams and 58 mph in Flagstaff the afternoon of the fire.

“It covered quite a bit of acreage,” Antonides said about the rate of the fire spread. “We were fortunate it was held pretty much by the road system in the area.”

Antonides said the fire swept through clumped grasses and burned to within several feet of a nearby home.

“It did get up underneath the deck of the house, but we kept it from catching the deck on fire or any portion of the home,” he said.

Antonides said the owners were not home at the time of the fire.

“They saw the smoke and started (responded) about the same time we got dispatched,” he said.

Despite strong winds, firefighters were able to contain the fire at 1.8 acres.

“It was in the corner of four different lots where it started,” Antonides said. “Then it spread primarily into one.”

No structures burned, however a UTV was deemed a total loss.

Antonides said the cause of the fire is undetermined.

“With these strong winds and dry weather, we would like to remind everyone that these fires spread fast and can be prevented,” Ponderosa Fire District posted on Facebook after the fire.

Antonides said the department is preparing for a busy fire season and has already sent firefighters to assist with the Rattlesnake Fire near Alpine.

“It’s going to be an interesting year,” Antonides said about the fire season.