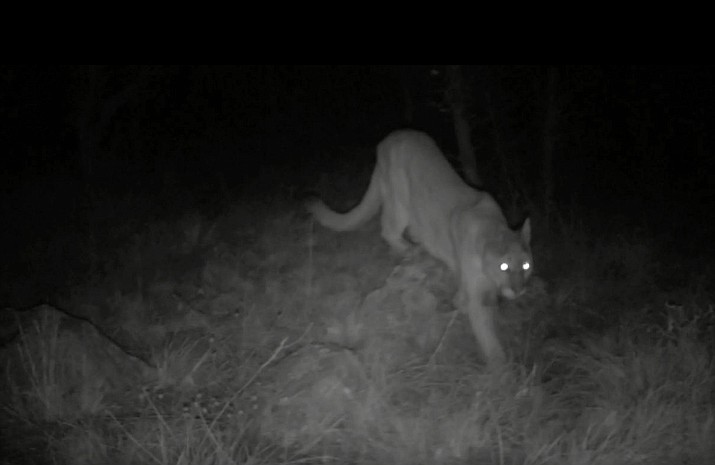 A mountain lion is captured on a trail cam near Second Street in Williams sometime between April 10-12. The camera is set up around 60 to 70 feet in the woods. Arizona Game and Fish is monitoring the area and any reported activity of the mountain lion. (Photo courtesy of trail cam footage provided by Brian Markham)

Police said six shots were fired at a mountain lion April 22 after it was seen on the back porch of a Third Street residence in Williams.

“(He) found a mountain lion on his back porch. He fired six rounds at it — missed all six and the cat ran off,” said Williams Police Chief Herman Nixon.

The incident occurred around 7:45 p.m. and was investigated by Williams Police Department.

According to Nixon, the man shot at the lion to protect his property and animals, however, Nixon said he does not recommend shooting at mountain lions, especially within residential areas.

“He was shooting a high powered hand gun and you’re firing that off in the dark at an animal and you miss six times so where are those bullets going? That’s not something we suggest,” he said. “(Mountain lions) are going to run from you. Just like this one did. You call the police department, we’ll go up there. At least we have the equipment and if we need to kill it we can.”

“He didn’t shoot until the mountain lion ran away. The mountain lion was probably 20 plus yards from him when he shot, running away. That is not what we want to see people do," said Will Lemon, a wildlife manager with Arizona Game and Fish. "The mountain lion display(ed) acceptable behavior to us — as soon as it realized there was a human, it went away from him and it ran."

According to Lemon, there have been indications that the mountain lion has been in the area for some time and has killed several house cats.

Lemon has investigated two additional reports of mountain lion sightings in the area of Second and Third Street on the southside of Williams.

“We have had two reports that I know of in the last two weeks,” he said.

Additionally, Williams Police Department has received reports of sightings, including a report of video footage from a trail cam from a residence on Second Street. Game and Fish received the same report.

“Another individual made the report to WPD and contacted our dispatch and had a video,” Lemon said.

Lemon said the lion passed the trail cam sometime between April 10-12. The camera is set up around 60 to 70 feet in the woods, according to Lemon, however, he has not received further information from the individual at this time.

“I would have thought from this incident that that mountain lion would have passed the trail cam but he hasn’t contacted us. So I don’t know if it’s using the same trail over and over,” Lemon said.

Lemon said he will continue to track where the lion has been seen and monitor its behavior. He said while the department has contracted hunters that will hunt depredation lions and bears, this lion has not displayed aggressive behavior toward humans.

“It is showing acceptable behavior still to us. As soon as it understood what this guy was and after a second or two of being out on the porch it ran away. That’s what we want a mountain lion to do. At this point and time we are not pursuing it with a contracted hunter or anything like that,” Lemon said.

Nixon said the police department does not have a shoot on sight order for the lion but said if they need to use force they will.

“We’re not out to kill it but if we catch it in the middle of the city and it’s near kids or animals (and is posing a threat) we’re going to take care of it. But we don’t want people shooting at it,” he said.

Remove food and water sources. Eliminate places where a lion could hide — trim trees, close sheds, knock down debris or rock piles. Keep pets indoors. Stay with them at night when they are outdoors.

Have motion lights set up, remove attractants and keep livestock in enclosed areas like a chicken coop or in the barn. Do not feed wildlife.

If you encounter a lion, do not run. Make as much noise as possible and make yourself as large as you can. If the animal attacks, the best thing to do is to fight back, according to Game and Fish.

Game and Fish said if acting in self-defense, you can use lethal force to protect yourself.

Additionally, the department said it is helpful to identify a lion by its tracks, which can be preserved with a picture or by placing a coffee or soup can over the track until Game and Fish can respond.