Mayor proclaims Carol Glassburn Clean and Beautiful Week in May 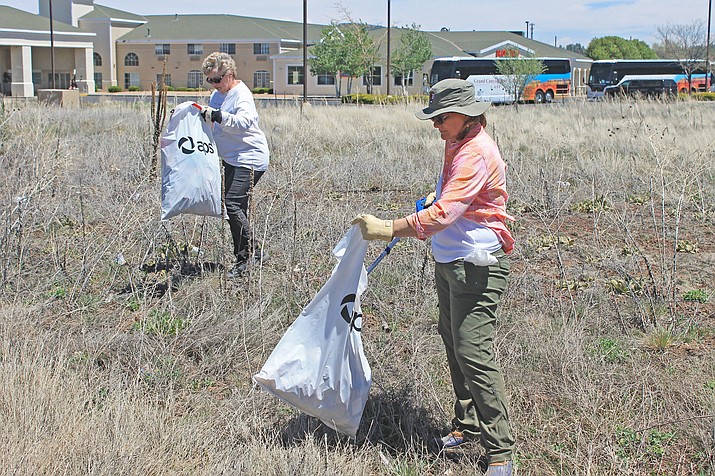 Participants pick-up garbage during a Williams Clean and Beautiful event in 2017. The city is hosting a clean-up day May 4.

In honor of the passing of Williams advocate Carol Glassburn, and to continue her efforts to revitalize the city with clean-up efforts, Mayor John Moore has proclaimed the first week of May as Carol Glassburn Clean and Beautiful Week.

Moore said he and Glassburn had a common vision to keep the city of Williams free of trash and debris.

“We’re going to try to make a big effort to clean up the town the first week of May in the name of Carol Glassburn,” Moore said.

Glassburn, who died March 20, worked tirelessly to improve the city of Williams, whether it was raising funds for the Williams Memorial Park or pulling up weeds along Grand Canyon Boulevard for the 30 years she lived here.

“I want us to continue the work Carol did,” Moore said. “It’s so important to us to have a clean town, not only for our own pride but for the economy and everything else we do.”

Moore said he recently received a letter from a visitor admonishing the city for the trash accumulating in Cataract Creek.

“We’re going to continue the clean-up days and put out an extended effort the first week in May to clean the town up,” Moore said.

One of Glassburn’s most endearing projects was the creation of Williams Clean and Beautiful, which she served as chairman of for over 24 years. The group hosts two clean-up days in Williams each year and has collected several tons of waste and recyclables.

“I hope the committee will continue to work with the city,” Moore said.

Moore said the city plans to extend their efforts to collect large appliances this year. In the past, residents could have appliances hauled off their property just during the clean-up days.

“Instead of having appliances sit in somebody’s yard for six months waiting for clean and beautiful days to come about, we are going to pick them up as soon as people call in,” he said.

Moore said residents can call the city for large appliance pick-up and the city will haul them to the Williams Transfer Station.

“That’s been one of my pet peeves for a long time, people that have appliances that just set them in the yards,” he said.

Volunteers are encouraged to meet at 9 a.m. May 4 in the parking lot behind the Williams Visitor Center. Volunteers will be provided maps and trash bags.

Coffee and pastries will be provided to all volunteer trash collectors. Plastic eggs filled with cash will be hidden throughout Williams on the day of the event.

The city has arranged for people to drop off household items at the rodeo barn and transfer stations that day. Computers, televisions, VCRs, stereos, copiers and fax machines can be recycled at the Williams Rodeo Barn between 8:30 a.m. and 1 p.m. Paper shredding can also be done at the barn. Household batteries can be disposed of at the sign-in table behind the Visitor Center.

Automobile tires (off the rim) can be dropped off at the transfer station between 8:30 a.m. and 3:30 p.m. No large truck or off road tires will be accepted.