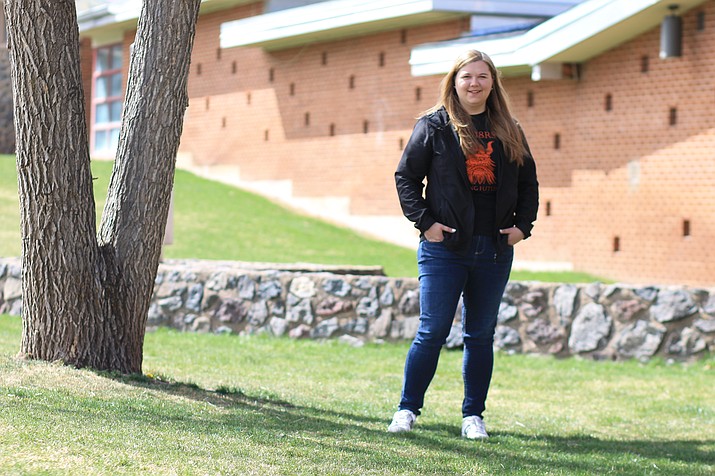 Williams Unified School District first-year teacher Catherine Kowalski is off to a great start in her teaching career after winning the 2018 Coconino County Rookie Teacher of the Year award.

Around 20 of Kowalski’s students, colleagues and friends were in attendance and cheered her win.

Kowalski is a math teacher at Williams High School, where she teaches geometry, pre-calculus and personal finance.

“It was a no brainer to nominate her for the Coconino Teacher of the Year award,” said WUSD Superintendent Rick Honsinger. “It was no surprise that she won.”

Honsinger said Kowalski came with high recommendations from her college and supervising teacher and she has not disappointed the administration with her enthusiasm at the school.

“She has turned out to be a marvelous math teacher that gets along well with staff and students alike,” he said. “She is committed to WHS and will help out in any way possible.”

Kowalski said building relationships with her students was important to her success at the school and one way to do that was to spend time with them in extracurriculars. Kowalski not only took on three math courses, but is an assistant basketball coach and golf coach, and a sponsor for the junior class, the hiking club, National Honor Society and math team.

“It means a lot to our school and community to be recognized and Ms. Kowalski represents the quality staff we have here throughout the district,” Honsinger said.

Kowalski received a $1,000 cash award, a free course from CCC, a season ticket to Theatrikos, two lift tickets to Arizona Snowbowl and a spot at the Flagstaff Fourth of July Parade.

Horner and Frechette received a $500 cash award, a season ticket to Theatrikos and a spot in the parade.

“…(she) really represented all of us educators here in Williams so well,” said WEMS principal Carissa Morrison about Durant. “Catherine Kowalski also made us super proud. “

Cornett receives a one-year new car leased from Findlay Toyota with money to offset the insurance costs. He received a $2,000 cash award, a free course at Coconino Community College, a season ticket to Theatrikos and a place in the Flagstaff Fourth of July Parade.

Durant and Smith received a $1,500 cash award, a free course at Coconino Community College, a season ticket to Theatrikos and a spot in the Flagstaff Fourth of July Parade.

All three teachers are given the opportunity to compete for Arizona Teacher of the Year.