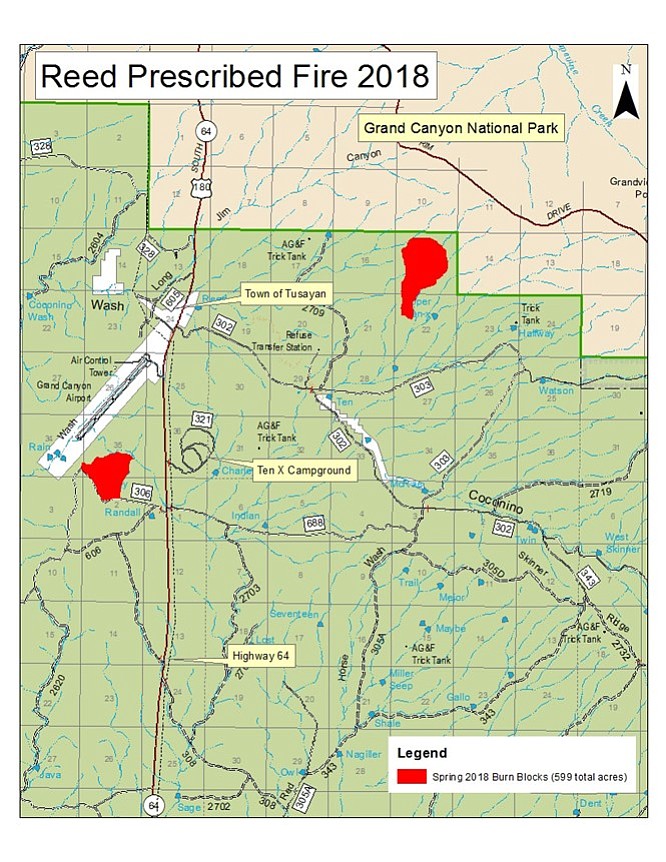 TUSAYAN, Ariz. - A prescribed fire by Kaibab National Forest will take place near Tusayan April 25-26 in order to improve forest health and reduce the risk of unnaturally severe wildfire to the community.

The area to be treated is part of the Reed Prescribed Fire Project, which has blocks both southwest and east of the town of Tusayan. Fire managers will focus on the 250-acre block southwest of Tusayan and south of Grand Canyon Airport. Ignitions will begin early tomorrow morning and are expected to be complete by Thursday evening.

Because of the proximity of the area to be treated to the community and the possibility of smoke impacts, fire managers look for very specific weather, fuel and wind conditions under which to ignite within the Reed Prescribed Fire Project. Fire managers plan to take advantage of predicted conditions over the next couple of days, due to winds that are anticipated to move the majority of the smoke west and away from Tusayan, the airport, Grand Canyon National Park, and state Highway 64.

Fire managers recognize the negative effects that lingering smoke can have on communities after a prescribed fire and are constantly adjusting tactics to minimize impacts. Ignitions only occur on specific days when winds will transport smoke away from sensitive locations and busy roadways. Crews will also burn smaller acreage blocks and begin earlier in the day in order to minimize smoke production time and allow for good ventilation throughout the afternoon. This strategy will lessen the early morning smoke that can carry into town from evening downslope winds.

Despite these mitigation efforts, some smoke is still likely to be visible at different times from state Highway 64 and from the communities of Grand Canyon, Valle and Tusayan.

The Kaibab National Forest is part of a fire-adapted ecosystem. It is dependent on fire to play a natural role in maintaining vibrant forest health. Fire on the landscape is critical to overall ecosystem functioning and to reducing threats posed to communities by unnaturally severe wildfire and its sometimes devastating after effects, such as watershed degradation and flooding.

The public can view approved prescribed fires for any given day on the Arizona Department of Environmental Quality’s website at http://smoke.azdeq.gov/. Prescribed fires on the Kaibab National Forest begin with the forest’s designator “KNF.”

Notifications of upcoming prescribed burns are provided regularly throughout the season. More information is available at www.fs.usda.gov/kaibab, on the Inciweb at inciweb.nwcg.gov/incident/5160/, on Facebook at facebook.com/kaibabnf or on Kaibab National Forest's Twitter at twitter.com/kaibabnf.