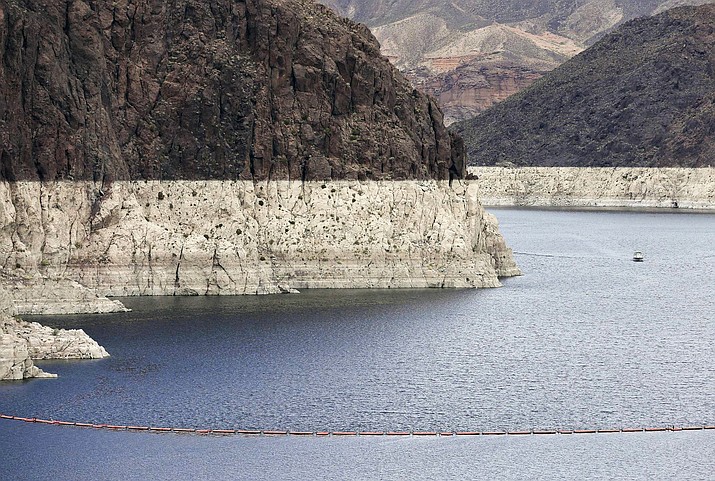 DENVER (AP) — Tension over the drought-stressed Colorado River escalated into a public feud when four U.S. states accused Arizona’s largest water provider of manipulating supply and demand, potentially threatening millions of people in the United States and Mexico who rely on the river.

The four states — Colorado, New Mexico, Utah and Wyoming — plus Denver’s water utility said the Central Arizona Project was trying to avoid a reduction in its share of the Colorado River while others are voluntarily cutting back to avoid a crisis amid a prolonged drought.

“It’s one water user taking advantage of a situation for their own benefit, to the detriment of a river that supplies nearly 40 million people,” said Jim Lochhead, manager of Denver Water, which gets about half its supply from the Colorado River.

The Central Arizona Project denied the allegations and said it’s been conserving. The utility uses canals, pipelines and aqueducts to carry water 336 miles (540 kilometers) from the Colorado River to about 5 million people in central and southern Arizona.

The Colorado River is the lifeblood of the Southwestern U.S. and northwestern Mexico, but it’s under increasing strain because demand is rising while the river is shrinking. Researchers blame an 18-year drought and climate change for the decline.

The outlook is getting worse. Last winter was exceptionally dry across most of the central and southern Rocky Mountains, so there will be below-average melting snow to feed the river.

The dispute over the Central Arizona Project revolves around how much water flows from the upper part of the Colorado River system to the lower. The upper part, called the Upper Basin, includes the four states challenging the Arizona utility. The Lower Basin includes Arizona, California and Nevada.

The Upper Basin states now claim the Central Arizona Project is manipulating its share in a way that keeps Lake Mead low enough that the Upper Basin is required to send extra water, but high enough to avoid mandatory cutbacks in Lower Basin consumption.

Ted Cooke, general manager of the Central Arizona Project, called that level the “sweet spot.” In remarks posted on the project’s website, he indicated the utility wants to keep Lake Mead there for as long as possible.

That prompted the four Upper Basin states to send Arizona an unusually blunt letter Friday. They accused the Central Arizona Project of ignoring the river’s dire condition and endangering water supplies for millions of people. They warned they wouldn’t voluntarily conserve water if the Arizona utility was going to take it.

In an interview, the Colorado representative who signed the letter, James Eklund, said the Arizona utility has made “gaming the system” a policy goal.

“That’s just not conducive to collaboration,” he said.

Lochhead sent his own letter to Arizona officials on Monday, saying Denver Water would stop contributing to a fund that promotes Colorado River conservation unless the Central Arizona Project stopped manipulating the river.

In a tweet last week, Cooke denied the utility was manipulating the river and described its practices as wise management.

He declined comment this week through a spokeswoman. The utility released a written statement saying it was surprised and disappointed by the Upper Basin states’ letter and wanted to “clarify apparent misunderstandings.”

What happens next wasn’t immediately clear. Eklund said the topic could come up at meetings this month among the Colorado River states and federal officials.

The states have a long history of cooperating on ways to conserve the waterway, Eklund said, and the Upper Basin states want that to continue.

He said they can’t afford to wait, because another dry winter could trigger mandatory cutbacks for water users under the rules governing the river.

“We’re really hoping that we get good precipitation, but that is not something we can control,” Eklund said. “What we can control is how we deal with each other.”