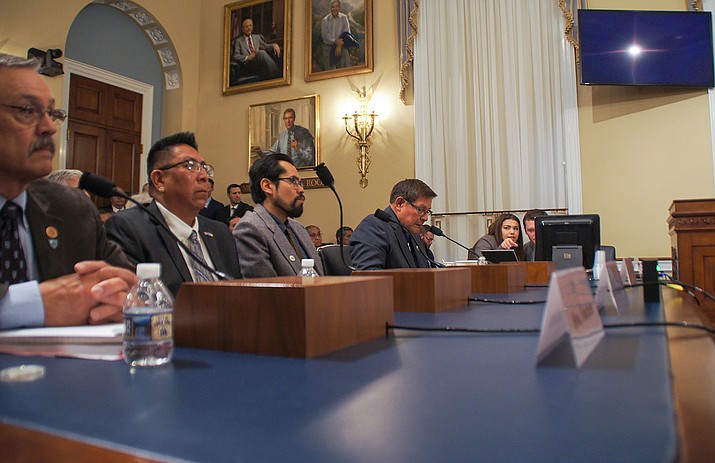 The Subcommittee on Energy and Mineral Resources was chaired by Arizona Congressman Paul Gossar (R-Dist. 4).

The plant’s owners decided last year to close the plant because they can buy cheaper power elsewhere and despite a "Yes to NGS" campaign, headed by local mine workers who work for Peabody Energy, the sole mine that supplies coal to NGS, there has not been a plan that counters that prevailing trend in energy production.

Navajo Nation Council Speaker LoRenzo Bates said the closing of the 2,250 megawatt coal-fired power plant, located on the Navajo Nation, was a challenging one, because it employs hundreds of Navajo people and it is critical to the Navajo economy — and Arizona’s, too.

Bates argues that the shutdown of the power plant is not inevitable because of current market conditions and consumer interests.

“The Navajo Nation is blessed with a wealth of natural fossil fuels and renewable energy resources — resources we have the right to develop, and which we have the capability to manage,” Bates said. “NGS is an essential component of the Navajo Nation’s economy and our energy portfolio, and must remain viable for the sake of the Nation and our people.”

Hopi Tribal Chairman Timothy Nuvangyaoma testified that NGS has been a key part of Arizona’s growth and prosperity and all Arizonan’s have benefited from the power produced and the water it helps pump, even if they do not realize it.

He said NGS supplies more than 90 percent of the power needed to pump water through the Central Arizona Project (CAP).

Revenue that NGS and Kayenta Mine provides 85 percent of the Hopi Tribe’s general fund budget and Nuyangyaoma said it is vital to the Hopi government’s ability to provide essential services to its people.

“At this time, our tribe is completely dependent on NGS because there is no railway to move our coal to other customers, Nuyangyaoma said and added that if NGS closes, the mine will be forced to close, as well.

“This would be catastrophic,” Nuyangyaoma said. “Our coal revenue supplements and bolsters the insufficient federal funds we receive. I cannot stress enough the severity of the financial costs for my tribe if NGS closes.”

But Nicole Horseherder, of To Nizhoni Ani, grew up on Black Mesa. She said talk of keeping the plant open is delaying and distracting from the economic transition the tribes need to make.

“Any discussions that hint at a future for NGS beyond 2019 are not based in any credible economic reality,” Horseherder said. “They are an incredibly wasteful distraction to helping the Navajo build a better future. Burning coal is uneconomic and can no longer compete against cleaner, cheaper and far more culturally appropriate sources of power, such as the solar and wind resources that are plentiful on the Navajo Nation.”

But the Institute for Energy Economics and Financial Analysis (IEEFA), which conducts research and analyses on financial and economic issues related to energy and the environment, disagrees. IEEFA said that it updated its May 2017 analyses of market conditions and the potential future of operations at NGS and determining if it would be economical for Central Arizona Project to purchase power from the plant from 2010-2030.

“IEEFA finds that Navajo Generating Station’s economic prospects are even more bleak than they were in May 2017, and the claim that CAP would save money by signing with NGS cannot be substantiated,” the report said. “In fact, NGS owners would lose $2.2 to $3.4 billion by continuing to operate the plant just through 2030.”

The report said CAP would lose between $454 and $693 million on average, or $41 to $63 million per year, if it were to continue to purchase power from NGS as compared to purchasing power from the market from 2020 to 2030.

“We have analyzed this up and down, and there is no obligation that this board need be concerned with respect to going forward and not purchasing NGS power,” Johnson said at a Board of Director meeting April 5. “if, in fact, NGS was to go forward and stay open with a substituted ownership group.”

In his testimony, Bates said the Nation is making strides toward a more diversified energy portfolio, such as the development of the Kayenta Solar Facility, which is providing 27.5 megawatts of photovoltaic solar energy. The second phase of the project will be constructed by the Navajo Tribal Utility Authority and produce over 50 megawatts of electricity, reducing the Nation’s dependence on outside energy sources.

But he said NGS is essential to the future, too.

“During this transition, it is very important that the Navajo Generating Station remain in operation beyond 2019 to continue providing jobs, revenue, and financial stability for the Navajo Nation and the state of Arizona — this is the a more balanced approach.”

Nuyangyaoma said the Hopi Tribe is landlocked and diversification is difficult. The tribe already lacks clean water, reliable electricity and access to internet and already has a high unemployment rate.

Nuyangyaoma said one solution for the Hopi is for the federal government to live up to its obligation to the Hopi Tribe under the Navajo Hopi Land Settlement Act of 1996 — where the government owes the tribe 144,000 thousand acres, which has been in limbo for over 20 years.

“These lands are my tribe’s future for economic development and diversification,” Nuyangyaoma said.

Even with all the testimony in support of NGS, no concrete plan was found to keep the plant open after its 2019 shutdown date.