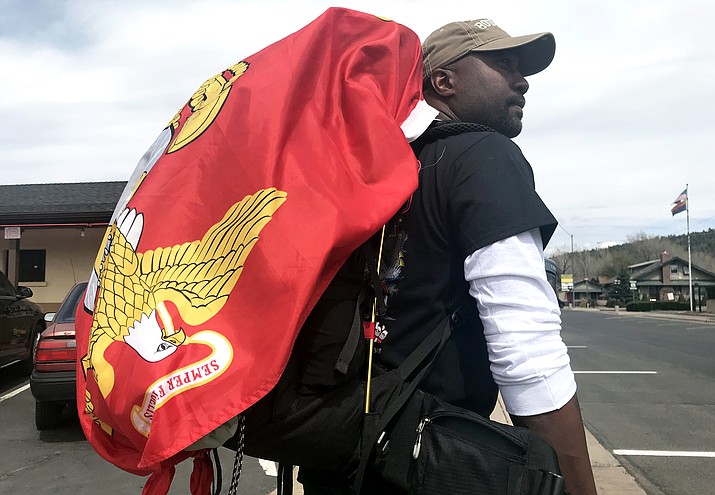 WILLIAMS, Ariz. — Walking across the U.S. is no easy feat and Gunnery Sgt. Roy Wesley Brady Jr. (Retired, U.S. Marine Corps), is making his second walk across the United States to raise awareness of combat and mentally wounded veterans.

Brady partnered with the Combat Wounded Veteran Challenge for his nearly 3,000-mile, six and a half month walk across the country, from San Diego to Trenton, New Jersey.

On April 5, Brady stopped for a brief rest in Williams. He plans to follow Route 66 as much as he can during his journey.

Brady retired from the military in 2013 after 22 years of service and said he wanted to continue to serve the military community in whatever way he could.

“You’re retired, you can relax and do what you want to do, so I made mine a positive way of spending my time and tried to stay within the military community,” he said. “So I just keep supporting troops in whatever I think they need.”

His way of supporting veterans is by spreading the word about combat and mentally wounded veterans as he walks across the country.

“I just want to make sure they get all the best care they can when they come back from any venue,” he said.

Brady served in two combat deployments in Iraq during his military service.

Another reason Brady decided to make a second walk is to honor his brother, Major Brady, who took his own life after serving in the military.

Brady is from a long line of veterans, who were primarily enlisted in the Army. He is the only Marine in his family.

“I looked up to them,” he said. “At one point I was going to join the Army but then I got caught up in the Marine Corps and I’ve been there since day one.”

The organization is led by other combat wounded veterans who are committed to helping fellow veterans transition back into civilian life through rehabilitative high-adventure and therapeutic outdoor challenges.

Combat Wounded Veteran Challenge supports Brady by finding sponsors for his trip and allowing him to use their name for his awareness walk.

“Once you go their website you see exactly what they’re about and how they’re making these veterans better — mentally, physically. It’s a positive organization,” he said.

More information or for those interested in supporting veterans through the Combat Wounded Veteran Challenge is available at www.combatwounded.org/walk or by texting majorwalk to 41444.