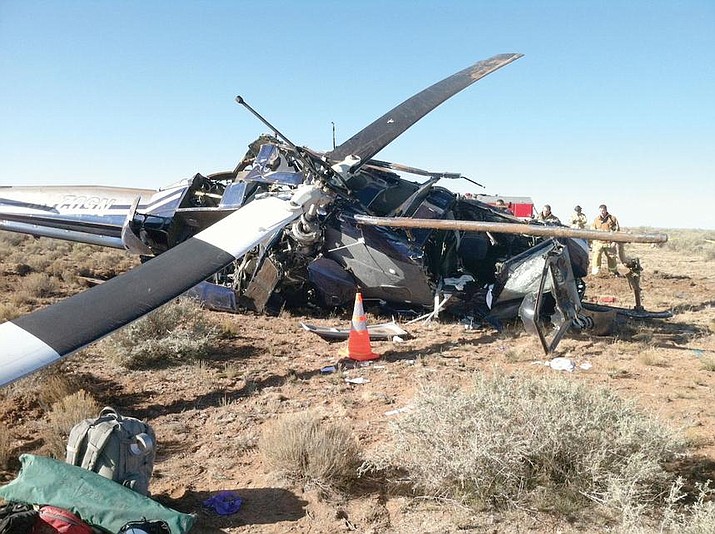 A faulty trasmission led to a helicopter crash west of Valle Nov. 15, 2011. (Photo/CCSO)

At the time of the accident, Boatman indicated he had just lifted off from the Valle, Arizona airport en route to Hilltop, Arizona to make deliveries for the Havasupai Tribe. Boatman was flying a Bell UH-1H Huey helicopter leased by Aero Leasing of Glendale and operated by Airwest, also based in Glendale.

Airwest provides helicopter services to the remote village of Supai and Boatman had been flying the route from Valle to Hilltop for many years.

On Nov. 15, 2011, Boatman was about 4 miles west of Valle, he said, when the helicopter began to experience mechanical failure. In a call to 911, Boatman indicated the helicopter’s transmission had failed and he was attempting to land the craft when it completely seized up and fell from the sky. After the accident, Boatman told interviewers it “driving down the freeway and your steering wheel falls off in your hands.”

Boatman was pinned in the wreckage and was critically injured. The lawsuit stated Boatman was paraplegic and suffered many severe complications as a result of the crash.

Napoli Shkolnik PLLC, a law firm that specializes in aviation accidents, said they used crash reconstruction experts to piece together what cause the helicopter’s transmission to fail mid-flight. Hunter Shkolnik, who argued the case before the jury, wrote that the crash analysis revealed the transmission had been overhauled about 13 years before the crash. Shkolnik alleged Uniflight LLC, which had performed the overhaul, was negligent, leading to “a catastrophic failure of the main transmission gearbox, causing complete disintegration in the gears and seizure of the components.”