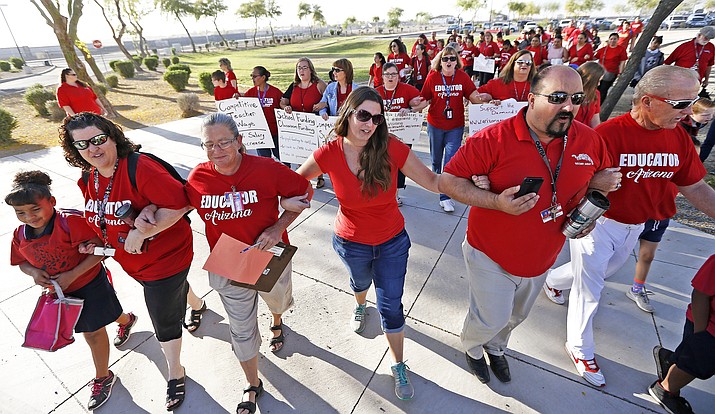 Teachers walk arm-in-arm with students and parents into Tuscano Elementary School as they stage a "walk-in" for higher pay and school funding Wednesday, April 11, 2018, in Phoenix. Teachers gathered outside Arizona schools to show solidarity in their demand for higher salaries staging "walk-ins" at approximately 1,000 schools that are part of a statewide campaign for a 20 percent raise and more than $1 billion in new education funding. (AP Photo/Ross D. Franklin)

The Republican governor proposed on April 12 a 9 percent teacher pay raise this year and 10 percent more by 2020, on top of 1 percent they are getting this year.

But he didn’t address teachers’ other demands, which include raises for support staff, a return to pre-Great Recession school funding levels and no more tax cuts until school spending reached the national average.