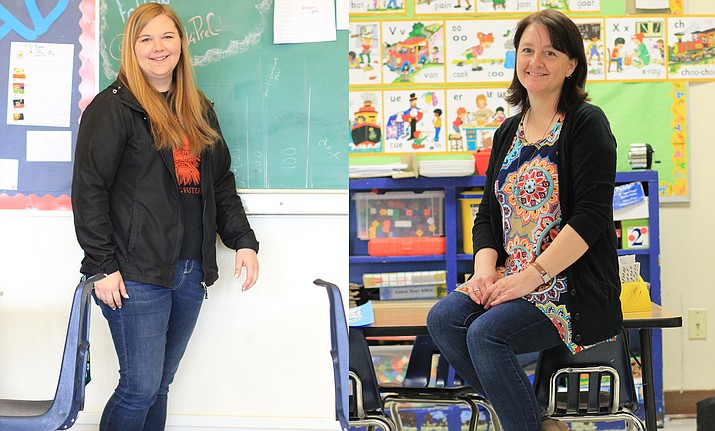 Coconino County Teacher of the Year is sponsored by Coconino County Superintendent of Schools and spotlights the contributions of state-accredited public and charter school teachers in grades prekindergarten through 12th grade throughout the county. The awards event recognizes skilled and dedicated teachers who have gained the respect and admiration of students, parents and colleagues.

Durant is a contender for Teacher of the Year and was nominated by Williams Elementary-Middle School principal Carissa Morrison. Morrison said she recognized Durant not only for her work with kindergartners, but also for her involvement with after school activities for the district.

“She sees a need and addresses it,” Morrison said about Durant in her nomination letter. “Her contributions with regard to extracurricular activities are evident throughout our entire school.”

Morrison said Durant is an exceptional teacher who loves her job. She said Durant’s classroom is an engaging environment where students are participating in exciting and intellectually demanding lessons.

“When you observe what Ms. Durant’s students can do, it’s hard to believe they are only five and six years of age,” Morrison said. “However, if you look closer, you can see how she does it — by making this challenging work fun and age appropriate with dance and play and props and imagination.”

As a teenager, Durant cultivated her love of children by teaching and coaching gymnasts and continued to work with children throughout her time in the U.S. Air Force. She went on to earn a bachelor’s degree in business and early childhood education, and a master’s degree in curriculum and instruction.

“After the military I took some time to figure out what I wanted to do,” Durant said. “I thought about what it was that I loved, and I realized it was teaching.”

Durant has spent the past 12 years teaching prekindergarten and kindergarten age students, with the past four at Williams Elementary.

She said she feels kindergarten is a critical step in the learning process.

“It’s important for them to love school and take charge of their education,” she said. “That to me is where I can have a lot of impact.”

"It’s those ah-ha moments when the light bulb goes on and you see the light in their eyes.”

Durant said she enjoys seeing her students every day and especially loves this time of the school year when the students are seeing the results of their hard work.

“It’s those ah-ha moments when the light bulb goes on and you see the light in their eyes,” she said. “They’re like, ‘I’m a reader.’ That’s huge. That’s it. That will take me through the whole year.”

Like many teachers, Durant has had to struggle with the changing landscape of education. She said although she loves teaching and her students, Arizona teachers have many challenges.

“I’m fortunate to have outside support, so I can make it,” Durant said about low teacher pay. “But I have tons of colleagues across the state that have to have second jobs. And those are not for fun vacations, they are for food and for letting their kids be in Little League.”

Durant said although Arizona is a tough state to teach in, the support from her colleagues and the WUSD administration has allowed her to thrive in her role as a teacher.

“This is a really good district to work for,” she said. “I’ve worked all over the country and the camaraderie is great, the administration is great.”

Durant has taken her love for education to the state level where she now serves with the Hope Street Group’s Arizona Teacher Fellows Program, an organization whose mission is to improve teaching through professional development and teacher leadership.

“I love being in the classroom, but I also recognize in myself that I’m a passionate advocate for education for the kids,” she said.

Catherine Kowalski is a first-year teacher at Williams High School and was nominated for the Rookie Teacher of the Year award with Coconino County. Kowalski teaches geometry, pre-calculus and personal finance at the school.

According to Williams Unified School District Superintendent Rick Honsinger, Kowalski quickly embraced her role as a teacher as well as a mentor to her students in her first year.

“She truly has a great rapport with all of her students,” Honsinger said about Kowalski in his nomination letter.

“She is so invested in the students’ education that there is no time for misbehavior,” Honsinger said.

Kowalski grew up in Illinois and graduated from Northern Illinois University in 2017 with a degree in mathematics and endorsements in economics, geography and education.

“I liked math, but I honestly never thought I would end up as a teacher,” Kowalski said.

She said her attitude began to change, however, with an influential economics teacher at her high school.

Kowalski said she always did well in math as a student and found that becoming a teacher fit her personality.

“It takes somewhat of a nerdy person to become a math teacher and that kind of sticks with me,” she said.

Kowalski said her goal with her students is to get them to understand that anyone can learn math. She said most students either love or hate math and she has rarely found someone who is indifferent.

Kowalski said her favorite part of the year has been getting to know her students. She said she values the relationships she has made and feels like the students are her coworkers.

“I see my students more than I see anyone else during the week, so if I don’t get along with them then my job is pretty miserable,” she said.

Kowalski said a key component of building relationships with the students has been spending time with them in extracurriculars. Kowalski was an assistant basketball coach and golf coach this year, as well as a sponsor for the junior class, the hiking club, National Honor Society and math team.

“The amount of work I’ve had to do has been a challenge and I’m involved in a lot of things at the school, but it’s been really rewarding,” she said.