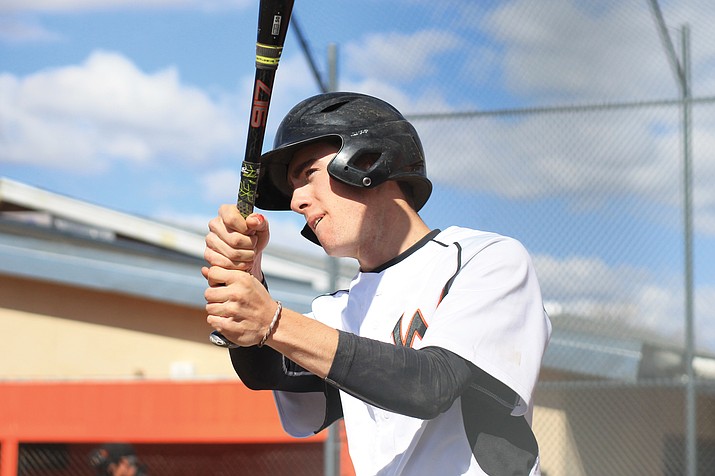 Sergio Ramirez sends a ball down the third base line in an earlier season game. (Wendy Howell,WGCN)

The Vikings got on the board early, striking for two runs in the first inning and another three in the second. The first inning scoring was fueled by a Tate Grantham double, while the second inning rally was started by patient at-bats from the bottom of the order, with Kramer and Sergio Ramirez walking and eventually coming around to score.

On the mound, Kramer held Joseph City scoreless through two innings, striking out three while limiting them to just one hit. The Wildcats scratched out a single run in the third following a leadoff hit-by-pitch, but the tally would remain at 5-1 through a scoreless fourth inning.

In the top of the fifth, Payce Mortensen ignited a three-run rally with an inside-the-park home run on a line drive that eluded a diving centerfielder. The other two runs in the inning came courtesy of singles by Michael McNelly, Zain Grantham, and Cody Jensen.

Now leading 8-1, Williams went to the bullpen in order to enable Kramer to pitch at the Chandler Prep Tournament over the weekend. Joe Zabala was the first in relief, throwing a scoreless fifth and sixth innings with a pair of strikeouts. Meanwhile, the Vikings hitters kept the pressure on in the sixth and seventh, extending the lead to 14-1.

After Zabala gave up two hits to start the bottom of the seventh, he was relieved by Cesar Santana, who struck out three to close out the win. Altogether, the three Vikings pitchers combined for a total of 12 strikeouts against just one walk, while the defense committed only one error.

On the offensive side of the ball, the Vikings were led by Zack Perkins and Grantham with three hits apiece, while Mortensen and John Bryant each had two hits. Williams was also aggressive on the base paths, swiping seven bags on the day, including three by Carsten Brinkworth and two by Grantham

The Vikings traveled to the Tempe Diablo Complex for the Chandler Prep Tournament April 5-7., where they went 2-2 against a quartet of higher-division schools amid 90-degree temperatures.

In the first game against 3A American Leadership Academy on April 5, Williams got a strong start from Zabala, who limited the Patriots to just one earned run through 5 1/3 innings. However, four Vikings errors in the fifth and sixth innings led to five unearned runs as Williams fell 6-2.

On April 6, the Vikings started the day with a solid 7-1 victory over 2A Round Valley. The Vikings’ nine hits were backed by 6 2/3 innings of 2-hit, 8-strikeout ball from Santana, with Grantham coming in to record the final out.

In the second game of the day, the Vikings lost 8-1 to 3A Tanque Verde. Defensive miscues led to most of the scoring, as Williams fielders committed eight errors. Perkins accounted for the Vikings’ lone run on an inside-the-park homer.

Williams closed out the tournament April 7 with an impressive 11-2 victory over No. 8-ranked 2A Alchesay, led by six innings of 4-hit ball from Kramer. Vikings hitters clubbed out nine hits, led by Mortensen with three singles, and Brinkworth and John Bryant with two apiece.

Now ranked No. 6 in the 1A conference, the Vikings hosted Fredonia for a doubleheader April 10 before traveling to Tuba City for a twin bill against Greyhills Academy April 13.