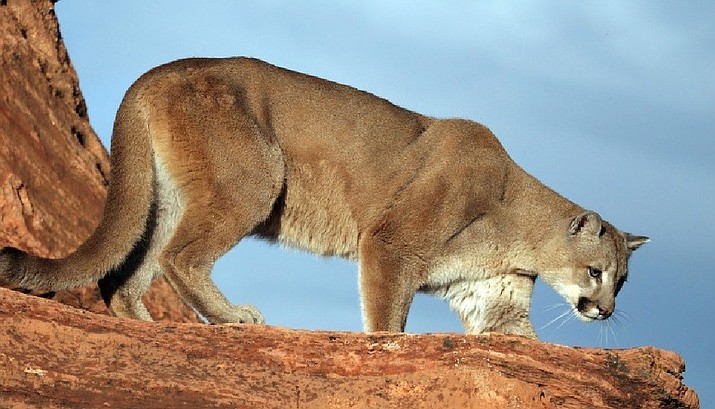 Mountain Lion perched on rocks. The large cats are normally most active around dusk. (Lynn Chamberlain/Utah Division of Wildlife)

PHOENIX — Arizona voters won’t get a chance to outlaw “trophy hunting’’ in the state, at least not this year.

The Humane Society of the United States has pulled the plug on its proposal to put a measure on the November ballot to make it illegal to pursue, shoot, snare, net or capture any “wild cat.’’ That specifically means bobcats and mountain lions.

In a prepared statement, Kitty Block, acting president of The Humane Society of the United States, said she still believes that Arizonans would support the initiative.

But she said efforts to gather the minimum 150,642 valid signatures by July 5 have been hampered by some new Arizona laws governing the circulation of initiative petitions and requiring “strict compliance’’ with every technical aspect of state election laws. Those laws, she said, make signature gathering more difficult and make it more expensive to hire paid circulators.

Block also said there also are “national issues that currently demand our attention.’’

Opposition groups, in their own statements, called what Block said “an excuse-laden message.’’

Pete Cimellaro, president of Conserve and Protect Arizona, said the failure of the petition drive “is a clear indication that Arizona voters reject highly political efforts by a non-Arizona organization to destroy science-based management of wildlife.’’

But the measure also drew opposition from the Game and Fish Commission.

But Kurt Davis, a member of the commission, said the number of mountain lions killed each year —about 360 in 2015, the most recent numbers available — simply keeps the population of about 2,500 in check and ensures that other species that are prey like bighorn sheep and pronghorn antelope are not decimated.

And Davis said he sees something more sinister in the measure: part of an effort to ban hunting entirely.

Kellye Pinkleton, the national group’s Arizona state director, denied that is the agenda. But in introducing the initiative last fall she said that hunting big cats is different.

“These essentially are killed for trophies or for fur,’’ she said, and for “bragging rights’’ about killing a lion.

“This is not deer or elk where communities are using the whole animal, whether for the meat or whatever,’’ Pinkleton continued. “This is not a subsistence animal.’’

Davis took exception to pushing the initiative as a ban on hunting “trophy’’ animals.

“The notion of ‘trophy’ is a political notion that they’ve tested and polled,’’ he said, with no actual legal basis.

And Davis said if the test of “trophy hunting’’ is whether hunters actually eat what they kill, that would include the hunting of coyotes.

More to the point, he said it ignores that hunting is “a tool used by our state’s biologists ... to manage our state’s wildlife.’’

As crafted, the proposal also would have banned the hunting of jaguars, lynx and ocelot. But those already are protected as endangered species.

The group and its local affiliate have a track record of sorts. In 1994 they succeeded in getting Arizona voters to approve a ban on the use of leg hold traps on public lands by a margin of close to 3-2.