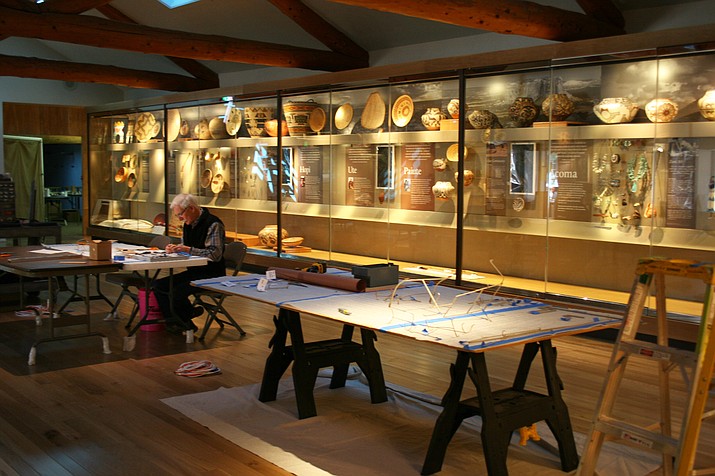 The Museum of Northern Arizona (MNA) will unveil an expanded and revitalized gallery called Native Peoples of the Colorado Plateau with an exclusive preview for Native people April 14.

The preview April 14 provides complimentary museum access for Native people from 10 a.m. to 5 p.m. and exclusive gallery access to Native Peoples of the Colorado Plateau from 10 a.m. to 1 p.m.

The permanent exhibit opens to the public April 15 and seeks to give a deeper insight into the 10 tribes that have always lived in the region.

This is the first major renovation of the museum’s Native American exhibit in nearly 40 years.

The materials in the exhibition are from the Zuni, Acoma, Southern Ute, Southern Paiute, Hopi, Havasupai, Hualapai, Yavapai, Dilzhe’e Apache, and Diné (Navajo) communities. Items in the displays will run the gamut from weavings, pottery and fine silverwork to toys, tools and even a skateboard. A table in the center of the exhibition will show how the tribes approach celebrations, adornment, food, toys and games.

After experiencing a welcome message in each tribe’s own language welcoming people to the gallery, visitors will see multi-level glass display cases running down each side of the gallery. The design allows for a broad overview transitioning between each tribe and exploring themes that transcend each tribe while also drawing one into the smaller pieces and the multi-media display for each tribe.

MNA President Emeritus Robert Breunig emphasized that in the renovation the museum was looking to show a comprehensive view of the tribes of the Colorado Plateau and showcase the museum’s collections — the exhibit more than doubles the amount of items from MNA’s collections for the public to view — and also have a flexible collection where items could be changed out to keep the exhibit fresh and new.

“Probably what I would say was the most important decisions we made early on was we said we want the tribes to tell their stories,” Breunig said.

It is that approach that is viewed as trailblazing.

The curators of the exhibition partnered with 42 members of the Colorado Plateau tribes to hear how the tribes wanted to present themselves. The tribal consultants also determined the exhibition’s themes and developed the educational content that will put the objects and photographs into historical and cultural context.

Breunig said each tribe was asked, first, if they wanted to be represented in the gallery, to which all said yes. They were then asked, ‘what do you want people to know about you? what are the stories you want to share?’ From that certain themes surfaced, which are reflected in the statements from the tribes in the exhibit.

Those included where the tribes come from — for certain tribes that meant their emergence stories into this world. It also included migration — how the tribes found the places they were supposed to be, why they live where they do and how they feel about their place. Other themes include family life, sustenance, art and the tribes’ values.

“We talked about being a good person, we talked about reciprocity, we talked about working together, respecting the land, respecting each other, having a good family life,” Breunig said. “I think everybody recognizes that the value statements represent an ideal and the world is not always that way. But in the tribes’ statements, they said, ‘This is what we value and this is how we’re supposed to be.’ And we want our children to know that — and we want people to understand that.”

“For us, tribal knowledge is sacred, and much of it cannot be shared with everyone,” said Ophelia Watahomigie-Corliss, a Havasupai council member who helped create the exhibition. “Traditional knowledge is taught by our elders and given when one is ready. Parts can only be known by specially prepared individuals. Here, we are sharing knowledge that we are comfortable giving to the world.”

The representatives from the tribes were also invited in to view the museum’s collections and asked which items should be on display and which should not be. There are 342 items displayed in the new gallery.

“They were participants and they drove the whole selection process,” Breunig said. “In some instances, they said, ‘No, we don’t want that shown.’ We were very scrupulous about honoring those mandates.”

Breunig described the collaborative experience with the tribes as wonderful and light hearted even while, at times, lots of emotion was tied up with telling the true story of the tribes’ experiences — not all of it happy.

For example, the Yavapai had a pretty bad history. In the 1860s, there was a systematic effort by white settlers and the U.S. Army to basically ethnically cleanse the Yavapai out the Verde Valley.

“It was a genocidal war,” Breunig said. “And that’s the only word you can use and we said it. When we were talking to the Yavapai ladies, one of them started crying and she said, ‘You know, this has all been swept under the rug and nobody talks about it. And we’re really happy you’re acknowledging and telling this story.’ There were those heavy emotional moments, but usually it was just good.”

As a whole, the tribes also want the public to know that they are still here as they have been for a long time.

The exhibit video display transitions from black and white historic photographs, which give context to the items on display to color, which represents the tribes today and the next generation who are coming on.

One section includes a skateboard deck painted by Hopi artist Mavasta Honyouti called “Walpi Woman,” a reference to the Hopi village established in 900 AD, which MNA CEO Carrie Heinonen describes as illustrating one of the major themes of the exhibition — that the tribes’ cultures are living, thriving and evolving — not just a part of the Colorado Plateau’s past.

“A common refrain that echoes throughout the entire gallery is ‘We are still here,’” she said. “One of the themes central to all the tribes is how they are honoring the history and traditions that define their culture while simultaneously living in the modern world.”

An attached room to be developed later will also discuss contemporary issues like water, sacred sites, uranium, food systems and health, more touchy subjects that are also an everyday part of tribes’ lives and cultures, and also part of what tribes want people to know about them.

Breunig emphasized the renovation was a team effort between Northern Arizona University, the collections staff at MNA and members of the Native communities.

The exhibit will open in an exclusive free preview April 14 for Native people and to the general public April 15.