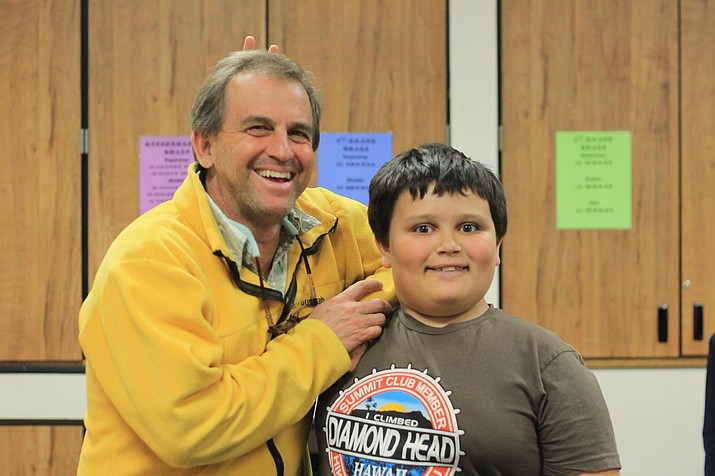 WILLIAMS, Ariz. — More than the snacks, more than the activities, hanging out with his “Big” is his favorite thing to do every Thursday, said “Little” Josh Van Winkle.

Van Winkle is one of several children at Williams Elementary-Middle School who participate in the Big Brothers Big Sisters program after school.

Thursday at the school to play with them and build relationships. They are part of the Big Brothers Big Sisters school based mentoring program.

The Big Brothers Big Sisters program matches children in second through fifth grade, known as Littles, with positive adult mentors, known as Bigs. The matches start out their weekly meetings as a group to share a snack and do an activity such as working on an art project or playing a game.

Then the matches have one on one time together, during which they can do homework, play a board game, or play on the playground.

The program is an opportunity for at-risk youth to engage in healthy alternatives to various high risk behaviors. Activities on and off-site include visits from guest speakers, field trips, job shadowing, sports and outdoor recreation, as well as other possibilities. Mentors are often just the type of positive influence that a young person needs to realize their own potential and navigate through the difficult teen years.

Big Brothers Big Sisters has been in Flagstaff for over 43 years and is a well-established and well-respected organization. The organization helps children realize their potential and build their future. We nurture children and strengthen the community.

A 2009 study conducted by Harris Interactive on behalf of Big Brothers Big Sisters of America found that former Littles, now adults, who were matched for at least one year report that having a Big Brother or Big Sister played an integral role in who they are today by positively influencing their self-confidence, providing stability, changing their perspective on life and pushing them to set higher goals.