I-40 repaving project underway between Flagstaff and Williams
Drivers can expect lane closures, lane crossovers east and west of Williams 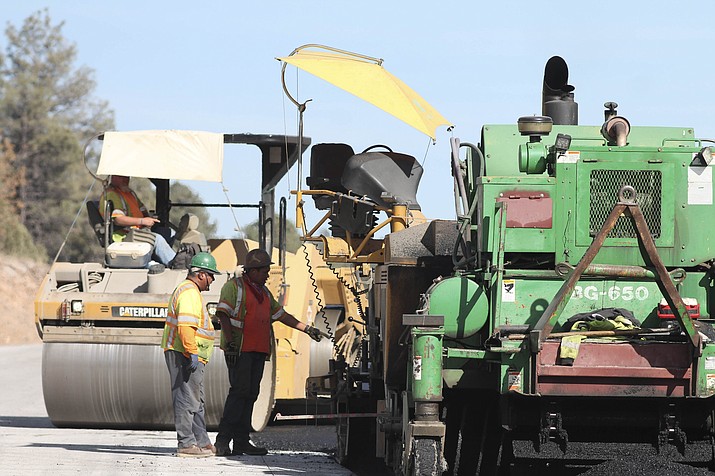 FANN Construction completes a repaving on I-40 east in October 2017. Spring paving projects will improve 182 miles of pavement on Interstate 40 and Interstate 17 in northern Arizona, according to ADOT. Projects are scheduled to begin this week and will last through the summer and into the fall. (Loretta Yerian/WGCN)

PHOENIX — Arizona Department of Transportation projects starting in the coming weeks will improve pavement along 182 miles of Interstate 40 and Interstate 17 in the Flagstaff area.

The paving projects will address deterioration caused by snow and snowplowing, the large number of freeze-thaw cycles the area sees each year and heavy use by commercial vehicles.

There are 34 miles of projects planned on I-40 west of Flagstaff and 28 miles of northbound I-17 south of Flagstaff.

Beginning April 2, crews will start rebuilding the westbound lanes of I-40 west of Williams between mileposts 156 and 161. Before the start of the winter season, crews rebuilt the eastbound lanes in this stretch.

Once work resumes on the $34 million project, westbound traffic on I-40 will cross over the median on a temporary road and share lanes with eastbound I-40 traffic through the project area, with one lane of travel in each direction separated by a concrete barrier.

In mid-April, ADOT will start a pavement-improvement project on I-40 between mileposts 179 and 162 from Parks to Cataract Lake near Williams.

This $35.3 million project includes areas between mileposts 167 and 172 where crews will fully reconstruct the roadway. Because of this, traffic will cross over and share lanes with opposite traffic, separated by a concrete barrier, between Garland Prairie and Pittman Valley roads. Work will begin in the westbound lanes.

Crews will work from 5 a.m. to 6 p.m. Monday through Friday. Drivers can expect lane closures through the project area.

Later this year, crews will return to put down the final layer of asphalt, known as friction course, on I-40 between Parks and Riordan from milepost 179 to 191. This will complete a $13.9 million pavement-improvement project that began last summer.

In the next several weeks, a project replacing pavement on the northbound lanes of I-17 approaching Flagstaff will get underway, with crews working from milepost 312 to milepost 340 near the I-17/ I-40 junction. The project will reconstruct northbound I-17 between mileposts 312 and 314.

This $24.4 million project includes replacing the bridge decks in each direction on the I-17 overpass at Willard Springs Road, near milepost 326.

The majority of the I-40 and I-17 work is expected to be completed this fall, with additional work happening the following spring.

Also in April, restrictions will begin for work on the I-17/I-40 interchange in Flagstaff, revamping I-40 bridges over I-17 and Beulah Boulevard. This $10 million project is scheduled to wrap up by the end of the year.

More information on these projects is available at azdot.gov/projects.