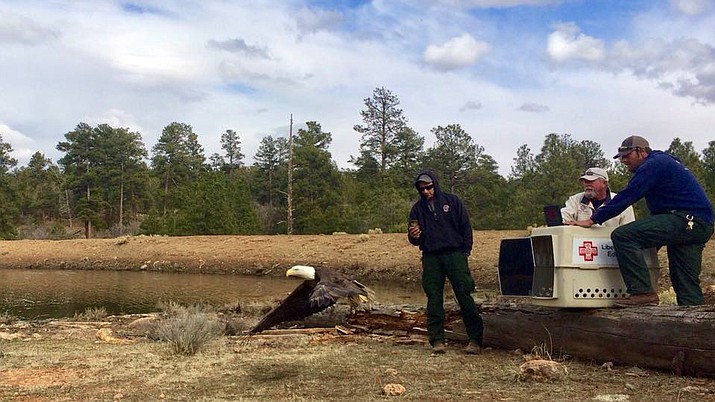 A rescued bald eagle is released near Grand Canyon after receiving treatment for lead poisoning and rehabilitation at Liberty Wildlife Refuge in Phoenix, Arizona. (Desiree Espericueta/NPS)

GRAND CANYON, Ariz. — A bald eagle is flying high after being rescued near Grand Canyon in January.

The Grand Canyon fire department found an injured bald eagle near the train tracks in Tusayan. Rescuers reported the eagle was bleeding from the mouth, disoriented and lethargic, and they thought it had been injured by the train.

The bird was sent to Liberty Wildlife Refuge in Phoenix where it was found to be suffering from an extremely high level of lead toxicosis. Birds of prey have elevated chances of developing lead poisoning after feeding on carcasses that have been contaminated with lead shot. The National Park Service, along with the Peregrine Fund, have been working to educate hunters on the risks posed by lead shot and encouraging them to use copper or steel bullets.

After five rounds of chelation therapy, which is used to eliminate heavy metals like lead from the body, the bald eagle was released in a healthy state at Russel Tank near Grand Canyon National Park March 26.