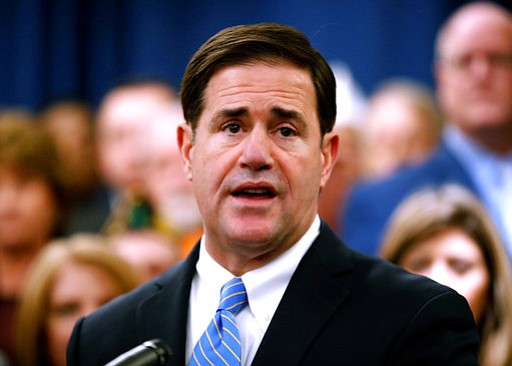 In this Jan. 22, 2018 file photo, Arizona Gov. Doug Ducey speaks prior to signing the order calling the Legislature into a special session at the Capitol in Phoenix. Some top Republicans in the Arizona Legislature want to add armed and specially trained school personnel to Gov. Doug Ducey's proposal to boost school safety. (AP Photo/Matt York, file)

But the proposal from the Republican governor fell flat with Democrats and students who have been protesting school shootings. The governor made no proposal to require background checks on private or gun show sales or to ban bumpstock devices that allow rifles to fire like machine guns, issues the students and Democrats say will help deter mass shootings.

The governor’s office rolled out the proposal more than a month after a Feb. 14 school shooting in Florida that left 17 dead and triggered protests from students across the nation.

The plan focuses on three areas: Mental and behavioral health resources at schools, restricting gun access for those barred from owning weapons or who show a threat to others and new school resource officers and armed volunteers.

Ducey wants to leverage $2 million in state cash to pull in $6 million in funding from the federal Medicaid program to boost the number of psychologists in schools. Once that money is spent, federal dollars would be included in future Medicaid allocations and help fund the new staff going forward. He also proposed an undetermined amount of new spending on school counselors.

His staff also announced plans to spend some new cash on school resource officers and enlist retired and off-duty officers to volunteer to guard schools.

The governor also wants to spend $1.8 million over three years to add new technology to a state criminal reporting system that feeds information to federal background check databases. There currently is a months-long backlog in putting new criminal convictions into the state system, meaning someone barred from buying a gun could do so until their new conviction is added.

“The governor believes that these are the loopholes that need to be closed now,” said Ducey spokesman Daniel Scarpinato.

“We know that the one that we can immediately start saving lives here in Arizona is by expanding background checks,” Hernandez said. “Not by merely fixing the system and making it faster, but by requiring background checks on all gun sales in the state of Arizona.”

The governor also proposes a law allowing police or family members, teachers and others to get a judge’s approval to seize guns from people who constitute a threat. The so-called red flag law is another top Democratic priority.

Ducey held separate talks with prosecutors, school superintendents, students, parents, law enforcement officials and others two weeks ago as he crafted the plan.

Students who are organizing a “March for Our Lives” event this weekend at the Capitol are calling on Ducey and the Republican-controlled legislature to enact universal gun purchase background checks, ban bump stocks and boost spending on school counselors so at-risk students can be identified early.

“It’s very clear that the governor’s office isn’t heeding what we are saying,” said 16-year-old student organizer Jacob Martinez. He quit as chairman of the Arizona Teenage Republicans last week.