The Arizona Department of Education released the final AzMERIT statewide assessment for all Arizona schools to the public Sept. 6.

Williams Unified School District (WUSD) showed improvement over previous year scores in some grade levels and some losses in others.

WUSD seventh graders were well below the state average of 34, with just 17 percent of the WUSD students passing the math test.

Maine Consolidated School fourth and fifth graders had 62 percent pass the math test as compared to the 47 and 48 percent state average. 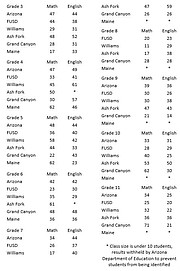