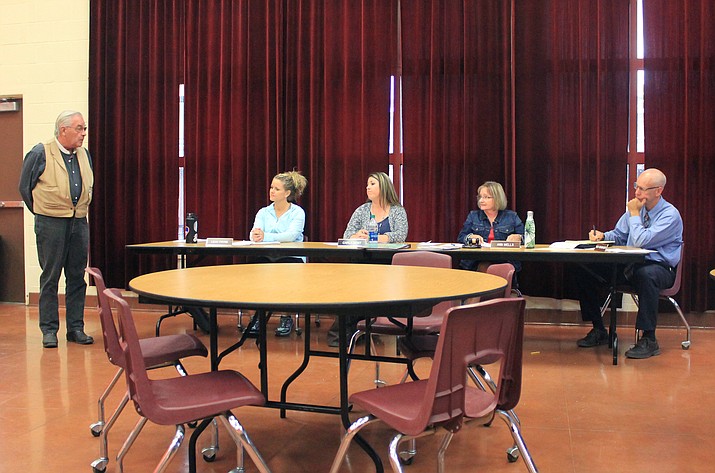 Approximately 20 veterans attended the meeting where several addressed the board and Superintendent Rick Honsinger regarding rumors that some teachers were discouraging patriotism and encouraging Islamic beliefs.

“I was at my shop the other morning and I was approached by a parent and a student,” Williams’ resident Buck Williams said at the meeting. “I am here this evening to simply state what was told to me. I’m not saying it’s true or false.”

“(The teacher said) that being an American is a problem with the whole world today,” Williams continued as he recalled the conversation. “This student was also with other students who watched 30-minutes of CNN (Cable News Network) and was given a quiz afterwards to make sure they had listened. Then the students were assigned a paper on the benefits of the Islamic religion.”

Citing the rules regarding governing board conduct, President Ann Wells said the board advised the veteran’s group that the board could only listen to the issues, not respond or take action at that time.

However, WHS world history teacher Kellie O’Toole-Lee, followed the presentation by reading a letter to the board.

In the letter she stated she was aware of rumors that had been circulating around Williams regarding the teaching of Islam and patriotism in the classrooms at WHS.

She said she was frustrated that inflammatory accusations were being made on social media and those concerned were not approaching the administration and teachers first.

“Arizona State Social Studies standards require that world religions, including Islam, be taught as part of the world history standards,” she said. “As WUSD teachers adhere to state standards, Islam and other world religions are getting equal time in the curriculum for world history. The material is provided factually and provides students with an understanding of other cultures throughout history. There’s no personal opinion and no favoritism involved.”

O’Toole-Lee went on to say that she does not believe any teacher at WUSD would discourage American patriotism.

“We say the Pledge of Allegiance every morning and students are required to behave respectfully during this time,” she said. “In my own classroom, I remind students that patriots died to defend our rights and I expect them to stand silently if they choose not to say it.”

Honsinger then approached the crowd and said he also had heard the rumors and saw the social media reports spreading on the internet.

“If this parent came in, if she really wanted some change, she could have come to me in the first place,” he said. “If she wanted to rile up and cause chaos, then I guess she went to the right place.”

Honsinger said when a parent approaches him, he makes an effort to respond and investigate any problems.

“If this community can’t trust me as an administrator, if they don’t think they have the right person at the helm, then they need to get rid of me,” he said. “If you do trust your administrators, then use them, go to them, ask them to sit down and talk to them.”

Honsinger said he has already investigated the anti-American rumors with the teacher involved and students who were in the class.

“I don’t like asking kids about their teachers,” he said. “That’s a hard investigation and I avoid it if I can, but sometimes it’s necessary.”

He went on to say he did not interview every student in the class, but “a good number of kids I trust.” He said he heard the same story from each student with a few small variations.

“One of the kids asked the teacher — ‘Do you think the fish is happy in that bowl?’” Honsinger said regarding a pet fish in the classroom. “The teacher said ‘I don’t know, he’s never really seen anything outside the bowl. He doesn’t know there’s a whole ocean out there.”

Honsinger said he does not believe the teacher to be unpatriotic or to be teaching anti-American sentiment. He said the teacher in question was in the Army for 12 years and served two tours in Iraq and one in Afghanistan.

“I think it’s OK for a guy who has served as many tours as he has to ask critical thinking questions,” Honsinger said.

“Every Thursday, Ms. Courtney’s class watches 10 minutes of news,” he said. “CNN produces a classroom friendly news session that is 10-minutes long and is specifically for schools. They have questions to answer so they understand what has gone on during the week. Part of our state standards are to teach current events.”

Honsinger added he would be happy to have any of the veterans visit the school and is hoping to organize another Veteran’s Day assembly at the school for 2017. Last year, dozens of veterans attended an assembly and visited classrooms following the event.

“I don’t know if we have a curriculum that teaches patriotism every day,” Honsinger said. “But we have the right people in place who teach the right respect and do the right things here. I’m proud of what we do.”