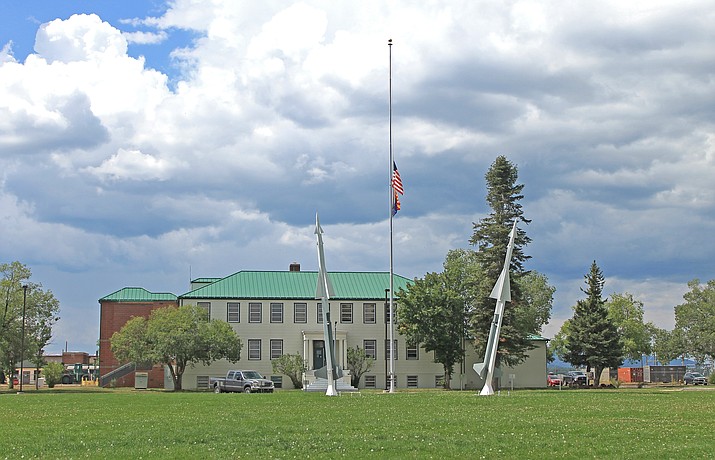 Navajo Ordnance Depot Fire, Guard and Dispensary Building was built in 1942 and restored in 2010.

Fields of yellow calliopsis flowers, wide swaths of ponderosa pines, the majestic San Francisco Peaks. There is so much to see on I-40 between Williams and Flagstaff, so it’s not surprising if the communities of Bellemont and Camp Navajo slip by unnoticed.

But for those who take the time to slow down and ponder what lies below Volunteer Mountain or what was stored in those vacant bunkers and warehouses that dot the landscape, they will find a fascinating story in northern Arizona’s history.

Warehouses and storage units from the 1940s dot the landscape at Camp Navajo. Many of the buildings are now used for public storage.

The Navajo Ordnance Depot was built in Bellemont in 1942 as an ammunition storage location for the Pacific Theater of World War II. Originally designated the Flagstaff Ordnance Depot, the 28,347-acre property at its peak had 227 miles of roads, 38 miles of railroad, 170 buildings and 777 storage bunkers and required 8,000 construction workers to build.

The historic Navajo Ordnance Depot chapel has been preserved on the base.

Los Angeles and San Francisco for the Pacific.”

In August of 1941, Army officials were searching for possible sites for an enormous munitions storage and shipping depot. According to Westerlund, who documented the history in his book "

Arizona’s War Town", the officials were looking for areas that could accommodate up to a thousand concrete igloos that would be a safe distance from nearby cities. The location also needed to have a cool climate, proximity to water and access to a railroad.

“They liked to build depots adjacent to towns, but at least 10 miles away,” Westerlund said.

When they came across Volunteer Prairie they believed they found the spot.

The Jan. 30, 1942 edition of the Coconino Sun announced the $17 million (about $291 million in today’s dollars) project would begin immediately.

The enormous project required a significant workforce, and the population of Flagstaff was just 5,000. Most of the residents of Flagstaff were already working in the timber and railroad business, or part of the peace time draft, so the War Department began looking elsewhere.

“The army looked around and saw the Navajo and Hopi reservations nearby and sent trucks up to begin recruiting the workers needed to run the facility,” Westerlund said. “People were drawn because the lowest wage offered at the depot was equal to a median and often high level wage in Flagstaff.”

In the winter of 1942, 33 construction contracts were awarded for the depot and by April more than 8,000 workers were on the base constructing roads, railroad tracks, fences, and utility lines, as well as the earth-covered concrete igloos, residences, storage buildings, platforms and ramps.

“Flagstaff was out of control,” Westerlund said. “People were advised not to drive through Flagstaff during this time.”

With throngs of men from all reaches of Arizona and the diversity of the population, clashes became inevitable. The Coconino Sun detailed several altercations that occurred between men during this time.

Buses transported 600-700 workers 24 hours a day to their jobs at the depot. According to Westerlund, around 15,000 people flocked to Flagstaff and Bellemont in the summer of 1942.

Many workers and their families were scattered throughout Bellemont. Some were camping under trees, some in a tent city that exploded outside the community and others were in cars, tin shacks and trailers.

Inside the depot, there was a maze of roads and railroads that connected each igloo, workshop, warehouse, loading ramp, utility service and magazine. The administrative area was on the northeast side of the compound and still stands today. To the west were large shops and garages for vehicles and equipment. About a mile away was where combat equipment was stored. The igloos were further south on the base nearer the tree line.

Typically, trains arrived from the east where they were met by depot locomotives that hauled boxcars to one of several holding areas. Once inspected, the locomotives moved the boxcars to one of the loading docks where crews of mostly Navajo workers unloaded the tons of munitions by hand from the boxcars to semitrailers. The trailers then hauled the ammunition crates, bombs, and shells to an igloo where more Native American crews unloaded and carefully stacked the munitions inside. They averaged about 27 boxcars per day.

The depot strained to keep up with the ammunition trains. In July of 1943, the workforce peaked at 2,172 workers, who were responsible for the unloading and storage of antitank mines, dynamite, firing devices, blasting caps and a variety of artillery rounds. Other workers dealt with rockets, hand grenades, pyrotechnics, smoke rounds, fuses and massive bombs. 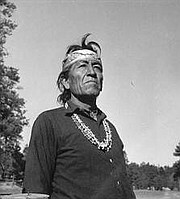 Touchen DoniTing was a munitions handler at Navajo Ordnance Depot in 1942. He was one of many Native workers

“It was selected as the most efficient depot in the United States,” Westerlund said. “And what made it that way was the people who lived at Indian Village.”

Most of the Native American workers set up tents and temporary shelters on the north side of Volunteer Prairie on the edge of Coconino National Forest.

Since they were unsure how long the jobs would hold out, no hogans, lodges, stones homes or other permanent structures were built. The temporary shelters were close together and unsanitary conditions prevailed.

“Conditions were disgraceful for many of these first Native American workers,” Westerlund said. “Dishonest traders took advantage of the workers and put up shacks along the highway and charged exorbitant prices.”

War Department officials recognized the deplorable conditions and realized the effect it was having not only on the workers but on the depot and potentially the whole Pacific campaign.

Officials chose a site on the base that became known as “Indian Village,” where hogans along with improved tents for Hopis were built. Nestled in the tall ponderosa pine, the hogans and tents were just a few feet apart, lined up in neat rows.

Despite the better accommodations, officials found many Navajos and Hopis were leaving the base and returning to the reservation.