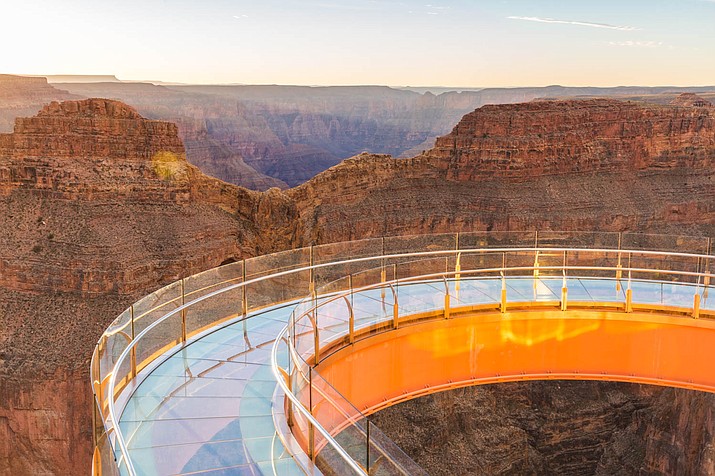 The Diamond Creek Pipeline could supply water to all of the attractions at Grand Canyon West, including the Skywalk.

Legislation to ratify the settlement was introduced last year, and is now being re-introduced in both houses of Congress. Flake, who along with McCain is a co-sponsor S. 1770, introduced yesterday, and Gosar, who will soon sponsor the House version, expressed their strong support for the legislation.

Flake said, “Without access to additional reliable water supplies, the Hualapai Tribe is unable to realize the full potential of their tribal economy, including the development at Grand Canyon West. This settlement provides significant but fair benefits for the Hualapai Tribe, and has important benefits outside the reservation and region.”

“This is a key milestone for Mohave County and the Hualapai Tribe,” Gosar said. “True independence and true freedom comes from economic freedom.  I am proud to support the tribe and the county as we all look forward to increased economic development making everyone’s future brighter.”

Under the terms of the settlement as outlined in the legislation, the federal government would expend $173.5 million for the construction, maintenance and operation of the Diamond Creek Pipeline. The Diamond Creek Pipeline would supply much-needed water for Peach Springs and, importantly, for the continued development of Grand Canyon West, which currently brings more than one million visitors to the region from around the world. Through its employee base and visitors, Grand Canyon West is one of the biggest economic engines in Mohave County and the surrounding region.

The Hualapai Tribe is also pleased to release a new economic report by Professor Joseph P. Kalt of Harvard University and the University of Arizona that predicts “decades of sustained growth” in Arizona from the passage of the Hualapai Water Rights Settlement legislation. The economic study pointed to thousands of jobs and billions of dollars in worker earnings that would result from passage of the legislation, which is welcome news for Mohave County, the state of Arizona and the tribe.

In a strong show of support, the Mohave County Board of Supervisors in May passed a resolution of unanimous support for the pending federal legislation. The resolution stated, in part, the water settlement “will allow the tribe to create hundreds of jobs for both residents of the Hualapai Reservation and non-reservation residents of Mohave County.”

Kalt is a professor emeritus at both the University of Arizona and the Harvard Project on American Indian Economic Development at the John F. Kennedy School of Government. His report focused on foreseeable fiscal and employment impacts of the proposed Hualapai Water Rights Settlement and, if passed, the related construction of a 70-mile pipeline to divert water from the Colorado River at Diamond Creek on the Hualapai Reservation to Peach Springs and to the tribe’s tourist development at Grand Canyon West.

In an Executive Summary, Kalt concluded, “Building the Diamond Creek Pipeline and supplying the much-needed water it will carry to the region will create and sustain decades of economic growth and development for Hualapais and non-Hualapais alike.” The study states the economic development resulting from the construction of the pipeline would support an average of more than 10,000 jobs per year for the region, with more than $6.2 billion in income for workers.

The Hualapai Tribe responded to the study with optimism, and encouraged Congress to move forward in passing the needed legislation.

“The Hualapai Tribe is proud to be the leader in economic development in northwest Arizona, and we know the prosperity of our people benefits so many others,” said Hualapai Chairman Dr. Damon R. Clarke. “The Hualapai people, including our past chairs and tribal council members, have worked previously with many other stakeholders to help us reach this next phase of our growth.

“And now we are grateful to Senator Flake, Senator McCain and Rep. Gosar for their vision of economic growth for the Hualapai Tribe, Mohave County and the State of Arizona. We stand behind their efforts and are ready to work with Congress to ensure the passage of the needed legislation.”

Kalt’s study concluded the federal expenditure “would pay for itself many times over” in resulting jobs and worker income, business revenues, and taxes collected at all levels of government. The study stated, “…the cost to the federal government of building the pipeline would be swamped by the benefits that the expansion of adequate water supplies via the pipeline would generate.”

The 53-page study, which goes into great detail about the background, history and needs of the Hualapai Tribe, along with a specific analysis of the proposed pipeline and the economic development outlook for Grand Canyon West and the entire region, concludes by stating the Diamond Creek Pipeline project is “clearly and overwhelmingly beneficial.” In addition, the study found the project “would generate, year after year, much higher levels of employment, wages, business output, GDP, and federal, state and local taxes than would otherwise be possible.”