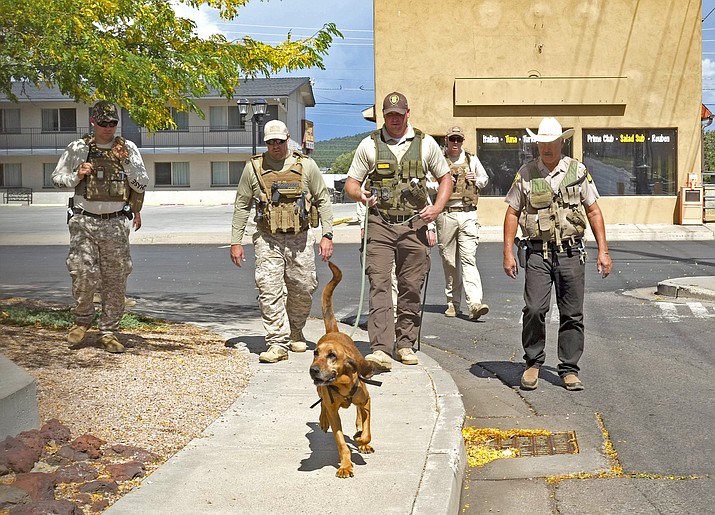 A team from Winslow’s Department of Corrections works through scenario training Sept. 14 in Williams. 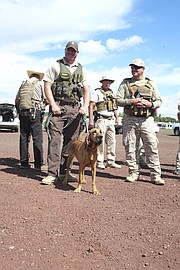 Approximately 80 students and 20 trainers were in Williams Sept. 14 conducting scenario training with bloodhounds. Teams of eight to 10 people went through a series of morning and afternoon trainings, which included robberies, search and rescue and lost child scenarios.

According to Officer Steve Lowe with Arizona DOC, the department has multiple K-9 units stationed at prison complexes statewide. These dogs are trained for emergency calls, contraband detection and locating escaped inmates among other security measures at the prisons.

“We’ve got 10 prisons throughout the state and each prison has its own team,” Lowe said. “Only one time a year are we able to get together and put them through some scenario based training like this.”

Lowe said the program has around 40 bloodhounds and is one of the only a few law enforcement agencies using bloodhounds.

According to Lowe, DOC has its own breeding program and trains the hounds when they are between 8 to 10 weeks old.

“For long-distance scent work for bloodhounds, that’s what their whole life is about,” he said.

“These are our special teams that go looking for escaped inmates and missing people,” Lowe said

Training locations are moved each year to keep dogs, handlers and chase and tactical teams sharp. This is the second time in 10 years DOC conducted training in Williams.

“We try to move it so we don’t overuse an area. We don’t want the guys getting familiar and knowing all the ditches and things,” he said. “Handlers are doing training every week but only a couple times a year we get to do anything big like this.”

Training lasted one week and included training in Bellemont, at Camp Navajo Army Depot. Lowe said DOC chose Camp Navajo because it is low-cost for them to use the facilities.

Department of Corrections officers train with their bloodhounds in Williams.

Officer Kevin Davis and his bloodhound, Holly, worked a missing person scenario in Williams Sept. 14. Davis works at Winslow prison and has been with the K-9 unit for nearly four years.

He said he has worked with other K-9 units in the past including with bite dogs and narcotic dogs. He has also worked as a decoy for other handlers and in the prison yard.

“I kind of worked my way into it,” he said. “I’ve also worked with the chase teams.”

Davis and Holly have worked together for around one year.

“You are always learning as a handler. You’re always progressing because you’re trying to get the dogs to progress,” he said.

While working with the K-9 units is a secondary duty for chase and tactical teams, this is Davis’s full-time job.

“I’ve liked it. It’s the hardest job I’ve had, but it’s also the most rewarding job,” he said.

During the training Davis said there were a few things Holly needed to work on, but overall she did a very good job.