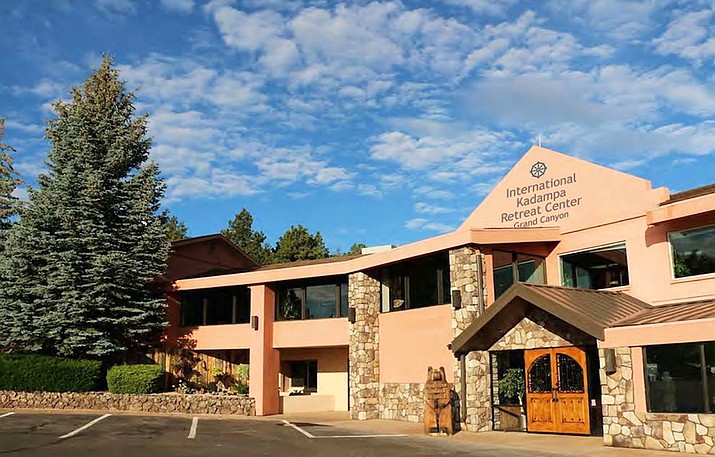 On Sept. 16, the center held an open house for the public offering them the chance to learn about the development of the retreat center and plans to build a new Buddhist temple. Participants were also offered a tour of the new meditation room, had the option to participate in a guided relaxation meditation and meet the IKRC community.

The IKRC purchased the Mountain Ranch Resort in June for the purpose of establishing a retreat center to offer study and meditation programs in modern Kadampa Buddhism. Additionally, plans for a new Kadampa Buddhist Temple, which will hold up to 1,000 people, are already underway.

The spiritual program at IKRC — Grand Canyon is being led by the Resident Teacher, Gen-la Kelsang Jampa, an ordained Buddhist monk and the deputy spiritual director of the New Kadampa Tradition. As a senior teacher, Gen-la Jampa has taught internationally for many years.

“I have to tell you, we feel so lucky to be here. It is so beautiful,” he said. “All the people we’ve met in Williams have been so kind and welcoming. We’re just very grateful. We know we are a new group coming in and everyone has been so welcoming. We want to be very good neighbors and a beneficial part of the community.”

According to Jampa, IKRC plans to start construction in April 2018.

“Our plan is to have an opening in the fall of 2018,” Jampa said. “Each one of the temples uses local materials so it kind of fits with the area — to fit the environment.”

According to kadampa.org, there are 1,200 Kadampa Centers and branches in 40 countries around the world where people can study and practice the teachings of Buddha. All Kadampa centers are non-profit organizations dedicated to benefiting their local community, and all their profits are donated to the International Temples Project.

According to IKRC, Kadampa Buddhism offers instructions for guided meditations and is open to everyone.

“It offers simple techniques for cultivating a good heart of love and compassion, and maintaining a peaceful mind,” the retreat stated in a recent press release.

The New Kadampa Tradition – International Kadampa Buddhist Union is an international association of Mahayana Buddhist study and meditation centers that follow the Kadampa Buddhist tradition founded by Geshe Kelsang Gyatso. Its purpose is to increase the Buddhist Faith throughout the world, according to kadampa.org.

Until the temple is complete, the property will be used as a retreat and meditation center.

The center will have a small residential community of between 10-20 people. As a retreat center, the hotel will be updated and a meditation room is being used.

“Once the temple is built, we will go through the hotel so it becomes updated, so it compliments and fits with the environment of the temple,” Jampa said.

The center is offering ongoing, Sunday morning classes starting Sept. 17 from 11 a.m. – 12:30 p.m. The classes introduce the practice of meditation.

According to kadampa.org, Kadampa Buddhist Temples are special, holy places, where people can receive blessings and powerful imprints on their minds which helps lead to deep inner peace in the future.

Additionally, many Kadampa Temples are being built around the world as part of the International Temples Project. The International Kadampa Retreat Center (IKRC) Grand Canyon is located at 6701 E Mountain Ranch Road in Williams. More information is available at MeditationinNorthernArizona.org.