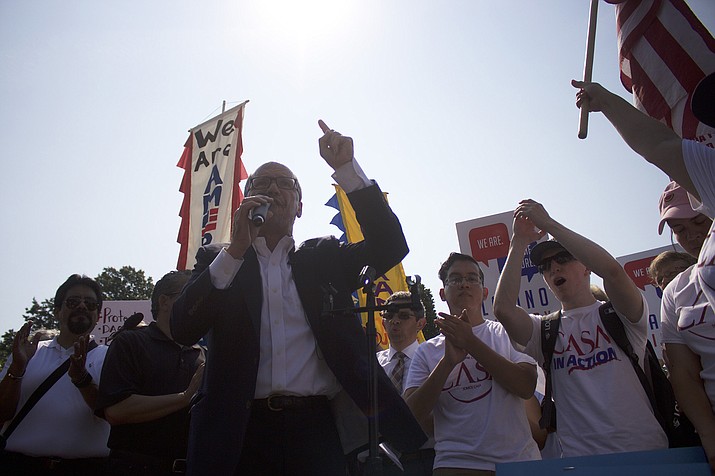 Democratic National Committee Chairman Tom Perez exhorts demonstrators protesting the Trump administration’s decision to revoke the DACA program. Perez told the crowd that the party is “on board” and ready to fight for a bipartisan legislative solution to reform DACA.

WASHINGTON — Immigration advocates vowed they would go to court to block a Trump administration plan to wind down a deferred deportation program for young immigrants, almost as soon as Attorney General Jeff Sessions announced the plan Sept. 5.

It was one of a range of reactions to the announcement that were swift and emotional, with one opponent saying the decision would cause “poverty, destruction and human suffering” and another calling it a “white supremacist scheme to terrorize immigrants.”

Business leaders worried about the potential loss of the thousands of employees who got permission to work as a result of the Deferred Action for Childhood Arrivals program enacted by President Barack Obama in 2012.

But supporters welcomed the move, saying it upholds the Constitution by doing away with a bad law, and they accused critics of fear-mongering.

Cassie Williams, a spokeswoman for the Federation for American Immigration Reform, lauded the announcement, noting that the promise to end to DACA was part of an immigration reform agenda that got President Donald Trump elected.

“These are the reasons people voted for Trump, this is why he got elected,” Williams said.

Trump himself did not make a formal appearance on the move, leaving it to Sessions to announce in a scripted, 10-minute news conference after which he took no questions.

In a written statement released by the White House, he said it is up to Congress to “advance responsible immigration reform that puts American jobs and American security first.”

But when asked later by a reporter about the DACA decision, Trump said he has “a great love” for the young immigrants who have benefited from the program.

Several states had threatened to sue over the program if the White House did not take action by Tuesday. Sessions said one reason for the decision to wind down the program was that he did not think it would survive a legal challenge, and that it was better to phase it out than have a court strike it down all at once.

But the administration is still likely to face a legal challenge, this time from the other side. The National Immigration Law Center promised Tuesday to file suit to block the wind-down.

“We at the NILC will be filing a lawsuit within hours,” said center Executive Director Marielena Hincapie. “We’re getting it together right now.”

She and others said they hope Congress can move forward on the latest version of the DREAM Act of 2017, a bill introduced by Sen. Lindsey Graham, R-South Carolina, and Sen. Dick Durbin, D-Illinois, that would put into law many of the protections of DACA. The bill has several co-sponsors on both sides of the aisle, including Sen. Jeff Flake, R-Arizona.

But Williams said the bill was a form of immigration amnesty, and that “amnesty has never done a real job dealing with illegal immigration. If we give them amnesty what’s to stop us from giving the next group amnesty?” she asked.

“We need an immediate move to merit-based immigration while reducing overall numbers, we need to construct a border wall and we need to defund sanctuary cities,” Williams said of Trump’s immigration priorities.

But others had more immediate concerns about the loss of DACA. Analysts said businesses would take a hit if Congress cannot pass a replacement for DACA.

“With DACA, youth have been able to move to more white-collar professional jobs,” said Julia Gelatt, a senior policy analyst for the Migration Policy Institute. “Employers will be in the difficult position of letting them go.”

And David Bier, an immigration policy analyst at the CATO Institute, said the burden of carrying out the administration policy would fall largely on employers.

“There is no prohibition in the law to work without authorization,” Bier said. “What prevents them (undocumented immigrants) from working is employers not being able to hire them.”

If DACA work authorizations ended, employers would face the decision to fire the DREAMers or face “fines and potentially criminal prosecution,” Bier said. “They could be fined up to as much as $1,000 a day.”

Gelatt said that despite the administration’s call for lawmakers to act, it has been “difficult for Congress to pass anything,” jeopardizing the future of DREAMers and their employers.

Williams said she has “great hope” that Congress will be able to pass something – but that “it’s hard to speculate on what will happen, but the president made clear his immigration policy”