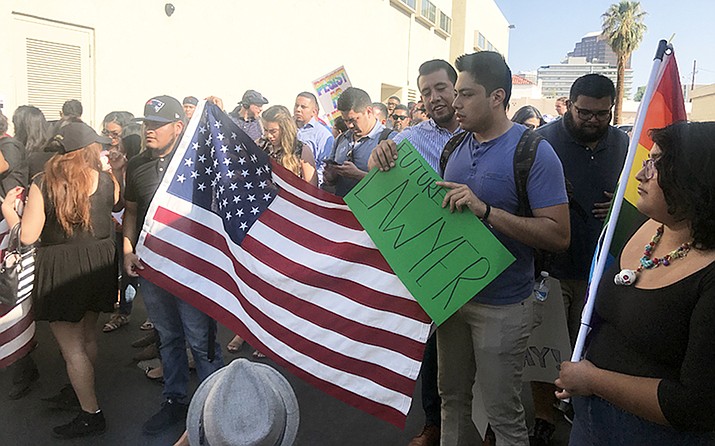 Supporters of DACA gather for an announcement viewing party at UCFW Local 99 headquarters in central Phoenix on Tuesday.

PHOENIX — The Sept. 5 announcement of the phase-out of the DACA (Deferred Action for Childhood Arrivals) program left recipients with many questions regarding what their legal options are and what steps they now may need to follow.

Cronkite News spoke with immigration attorneys about what are some of the following steps, from a legal standpoint, DACA recipients could have to take under the Trump administration’s new order.

Initially, attorneys suggest applying for DACA renewal before Sept. 5 and coming up with a plan in case recipients who are not eligible for renewal are forced to leave the country.

Recipients will be able to keep DACA and their work permits until their dates of expiration, according to the announcement made Sept. 5. If their permit expires between Sept. 5, 2017 and March 5, 2018, they have until Oct. 5, 2017 to renew it.

That leaves recipients with 30 days to get the documentation in order for renewal.

“Those people should apply as soon as possible for that extension,” said attorney Paul Djurisic.

According to Yolanda Medina, member of the Council on American-Islamic Relations in Arizona and also a DACA recipient, that deadline has been an issue for people who don’t have the $495 it costs to renew DACA. Medina said local organizations are currently working on finding solutions for individuals who don’t have the financial means to afford the renewal fee.

Medina said she is struggling to find the money to pay for her and her brother’s renewal, since she has to support her two kids and her siblings.

However, she said immigrant organizations are also concerned about those recipients whose permits expires after March 5, 2018.

All potential options, at the moment, are still unclear, she said.

Immigration attorneys Paul Djurisic and Joshua De La Ossa said DACA recipients who have their own businesses can continue to own them even after their work permit expires, but suggested they take additional measures in case they face deportation.

“The best course of action would be to find a family member, partner, friend, that does have (legal) status to be able to continue that business, or at least partner with them,” Djurisic said.

De La Ossa recommended DACA recipients create a power of attorney — a document that would give another person the authorization to make decisions on an individual’s behalf — with someone they trust to manage their business. .

For those DACA recipients who are parents of children born in the United States, both Djurisic and De La Ossa recommend having a power of attorney ready with a family member or guardian who also have legal status in the country. This would be necessary in case parents are deported.

“In some cases, people have actually adopted (the children) but that can only happen with children who are under 16,” Djurisic said. “But as a parent, that’s not something I recommend,” he added.

If there is no family member available, the two options left would be placing the children in foster care or taking their kids with them, attorneys said.

“But that’s not an option at all, especially for those who are from Central America where there’s crime and other things that are even more upsetting than some of the problems in Mexico,” Djurisic said.

Children of DACA recipients can only petition for their parents to be eligible for permanent residency status until they turn 21.  However, DACA recipients who are parents would have to wait years, in some cases decades, for their kids to turn that age.

That process is also complicated because in order to be eligible to apply for a legal residency status, immigrants must have entered the country lawfully. And have gone through an immigration inspection.

If the parent did not go through an inspection when entering the country, they would be required to return to their home country and start the residency application process from there.

“If you were brought crossing the desert when you were three months old, you would have to leave the country,” De La Ossa said.

However, immigrants are subject to a 10-year restriction on returning to the U.S. when they enter the country unlawfully, according to current federal immigration laws.

“It’s a scary proposition for those parents as well,” Djurisic said.

“That parent would have no other choice but to wait here illegally and hope that immigration doesn’t take them up, or hope that Congress passes something,” Djurisic said.

Before DACA was repealed, some recipients used their advance parole — a permit to return to the country when they travel abroad — to enter the country lawfully and be eligible to apply for a residency status, according to attorneys. But since Sept. 5, advance parole is no longer an option.

“A lot of the misinformation that has circulated among the opponents of DACA is that they think that there’s an easy way for these kids to become citizens, but there truly isn’t,” De La Ossa said.

Immigrants can apply for a waiver on the 10-year ban only when spouses or parents petition for them to apply for a legal residency status, according to attorneys. They would have to prove that “it would be an extreme hardship” on their relative, De La Ossa said.

“There’s a good number of these individuals who are married to U.S. citizens or who have U.S. citizen children and they’ve been left out in the cold,” Djurisic said.

One final tip from De La Ossa: Be careful when looking for legal services and representation. According to the attorney, the vulnerable situation many of the DACA recipients find themselves in can leave them open to becoming victims of scams coming from people who offer to help them in exchange for money.