Changes ahead for Williams water haulers 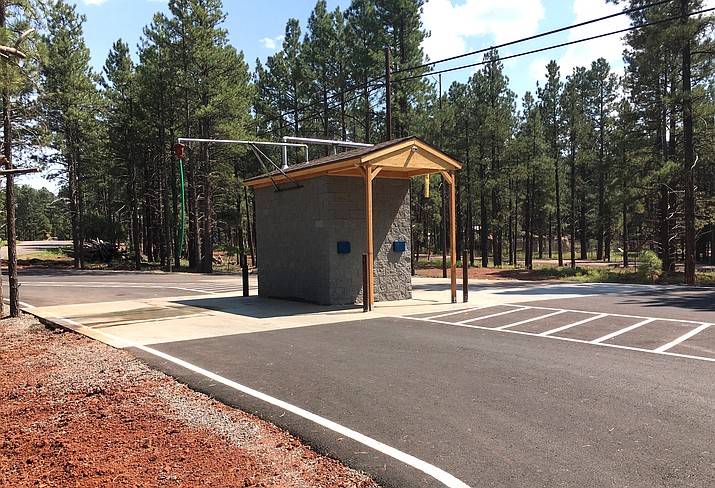 Bearizona has now opened a water station at the park.

Many water haulers near Red Lake were surprised last week when they showed up at the neighborhood water station to find a sign that said “closed.”

Hauling water is a way of life for many of those who live outside the city of Williams. Without a central water system and with deep wells being cost prohibitive, most residents depend on commercial water providers to fill their tanks.

Most residents in the Red Lake area north of Williams have used the water distribution tanks of Northland Water on Highway 64 for years and had no idea the station was closing.

“He has shut down completely,” said Dee Warneking of Northern Arizona Water Delivery.

Warneking said there has been a lot of confusion regarding Northland’s water station and the delivery business Running Water that most residents historically used.

“Northland and Running Water have gone out of business,” Warneking said.

Warneking said her company has purchased the assets from Running Water and will continue to provide water hauling services. She said she does not believe that Northland Water will reopen the water station, but for now residents are using a new water station at Bearizona.

According to Bearizona CEO Sean Casey, the Wildlife Park has been working on opening a water station for the public for several months. The park has a 3,600 foot well that was completed in 2015.

He wasn’t aware of the closing of the Northland Water station until people began showing up in droves at the Bearizona station.

“We ended up getting like 450 customer accounts set up in two weeks,” Casey said. “But we’re happy to provide this service. It works out perfectly — it’s not our main business but it’s a way to use the excess water we’re producing.

Casey said Bearizona is having to adjust to the high volume of users. Currently the Bearizona well produces 200 gallons of water per minute, but the park’s water treatment system limits delivery to 50 gallons per minute.

“We weren’t ready for the big wave of potable users,” Casey said. “This water is basically a byproduct of Bearizona, so I thought we’d just sell a little on the side, but its turned into its own real business.”

“We hope to get them online by November,” Casey said. “Then we won’t have to turn back any haulers.”

Casey said besides the residential haulers, the park has been providing water to commercial water haulers, such as Northern Arizona Water Delivery and several construction companies.

He said he has had to limit commercial users to ensure water is available for residential users.

“Bearizona has been absolutely fantastic,” Warneking said. “He (Casey) didn’t even bat an eye when I explained the capacity needs for the community. He stepped up to the plate, and the water quality is excellent.”

Casey said he decided to open a water station when he realized the Bearizona well produced a lot more water than the park could use. He said even with the addition of residential and commercial users, the pumps are only being used at 40 percent.

“We have to keep those deep well pumps running 24/7,” Casey said. “You don’t turn them off, they’re designed like the Dogtown pumps. They run all day, that’s the best use of them. Last winter we produced way more than we could use.”

“We’re happy to be able to provide a reasonably priced, high quality water,” Casey said. “We plan to double our production in November.”

According to Warneking, Arizona Water Delivery Company has been delivering water to customers in the Parks, Sherwood Forest and Bellemont area for several years. She said she decided to buy Running Water’s trucks upon the urging of county officials when Northland closed its doors.

She said her demand has doubled since the closure of the water distribution tank on Highway 64.

“This has been very hard on the community,” Warneking said of the closure. “Everyone now has to drive four miles farther and they have to drive on Highway 64. A lot of the personal trucks and trailers are old and overweight with water. They used to just have to go across the street. Now they have to go down the hill to Williams. A lot of people are just really uncomfortable having to do that.”

Warneking said Bearizona has had to limit the amount of water available to commercial operators until their new tank and treatment system are in place. She said that restricts her drivers to filling up late at night or having to drive to Bellemont or Valle to fill up.

“It’s not so much the distance, which does increase my costs a little bit, but mostly it’s that it takes so long,” she said. “It makes our delivery schedule much slower to implement so the whole community is struggling with that.”

Warneking said her drivers work seven days a week, with at least two drivers on at any given time. She said she has had to invest about $50,000 to rehabilitate the trucks acquired from Running Water.

“Those trucks are pretty old,” she said. “They are beat up from the dirt roads, the washboards, the potholes — it’s hard on big heavy trucks.”

Warneking said she essentially operates her business as a non-profit and has a special interest in looking for better options for rural residents who depend on water hauling.

“I actually make no profit on this company,” she said. “We’re running this very fine line — we don’t want to raise the water rates for people because they are already pretty high. But our equipment is pretty old.”

Warneking said water haulers typically pay around $55-60 for every 1,000 gallons of water. She said according to water surveys, average water rates around the state of Arizona hover around $25-30 per 1000 gallons.

She believes that placing distributed tanks throughout the communities north of Williams could be a way to reduce water rates for customers.

“I’d like to set up a nonprofit and find funding sources for these tanks,” she said. “If we could put tanks in seven different locations, we could use the big trucks to deliver water to those tanks and people could go there to get their water. It would be a couple of blocks instead of driving to town.”

Warneking said she is searching for grant opportunities now to cover infrastructure costs for the tanks.

“I calculated we could reduce passenger miles on Highway 64 by 1 to 1.5 million each year,” she said. “That’s a lot of carbon credits and it would be much safer for people.”

Northern Arizona Water Delivery can be reached at (928) 635-0900. Those who want to set up an account with Bearizona can go to pay4water.com.