Study: Senate bill could give 1.8 million DREAMers path to citizenship 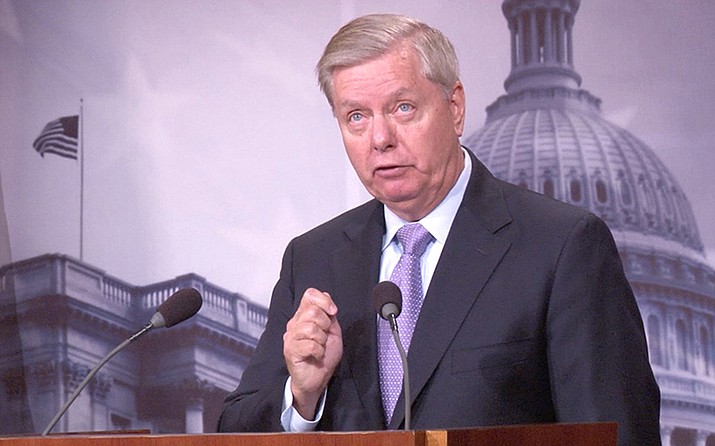 Sen. Lindsey Graham, R-South Carolina said the Dream Act 2017 is not charity, but is aimed at a specific group of people who would "add value to our country" if they were allowed to stay here as permanent residents or citizens.

They are called DREAMers, the young, undocumented immigrants who were brought to this country as children, and their dream of citizenship got renewed backing this summer from two prominent senators.

Sens. Lindsey Graham, R-South Carolina, and Dick Durbin, D-Illinois, said the Dream Act 2017 they introduced in July would give those young people a chance at permanent residence and a possible path to citizenship.

The Migration Policy Institute (MPI) estimates the bill could affect as many 1.8 million undocumented immigrants in this country, if passed — but passage is far from assured.

“It certainly does not face an easy future in Congress, for no other reason than the White House has suggested that the president would veto the legislation,” said MPI’s Michelle Mittelstadt.

But Graham said he is optimistic, noting that President Donald Trump has vowed to get tough on immigration but has also said he has a place in his heart for immigrant children.

As they unveiled their bill July 20, Graham and Durbin stressed that it’s not about charity but about doing the right thing for a specific group of young, undocumented immigrants.

“We believe that those who are brought to the United States as children, that have grown up in this country, have no criminal record, who are prepared to serve this country in a variety of ways, should be given that chance to make America a greater nation,” Durbin said.

The bill would give young immigrants who grew up in the United States a shot at permanent residence and, eventually, American citizenship under certain conditions. They would need to be in the U.S. for at least four years, have been younger than 17 when they arrived, be in school or graduated, pass a physical, submit biometric data and pay fees, among other possible requirements.

MPI estimates that as many as 1.5 million DREAMers could meet the criteria in the Senate bill, and 938,000 could qualify under a House bill that would require college completion, military enlistment or other professional criteria to get legal permanent residence.

Durbin first introduced a version of the Development, Relief and Education for Alien Minors — DREAM — Act in 2001 and has repeatedly resubmitted it, without success.

“The Dream Act is one of these pieces of legislation that is not greatly objected to in the main, but just has had an unlucky history in that it has passed in the House in 2010 and then the Senate chose not to take it up,” Mittelstadt said. “It has advanced significantly in the Senate but yet was not taken up by the House. So, the stars just have never been in alignment for this legislation.

That is not because of any entrenched opposition, said Mittelstadt, who added that “the Dream Act has been supported and embraced by both side of the aisle.” She said many lawmakers recognize that unauthorized immigrants who came to the United States as children have certain equities.

But Durbin and Graham said DREAMers live in fear of deportation, with little to no chance of citizenship, which is why reform is needed.

“We are talking about people who have been here a long time. Not a short time. Came here before they were 18,” Graham said. “They have not committed a felony. They graduate from high school or get a GED. They are pursuing a higher education. Either serve two years in the military or work for three years.”

Graham said he was inspired, in part, by Sen. John McCain, R-Arizona, who wanted to fix a broken immigration system because he is from Arizona and he sees the downside of illegal immigration.

“He sees the abuse from coyotes. He sees women living in the shadows that have no rights and are being exploited and on and on and on,” Graham said.

But both senators said it will not be easy for DREAMers to get protection under their bill, and they would have to prove they can stay in the country.

“It’s not an act of charity,” Graham said. “You stay here if you can prove you are moving in the right direction. You can add value to our country and if you can do all the things I described, then under our bill you can stay and one day get a green card and become an American citizen.”