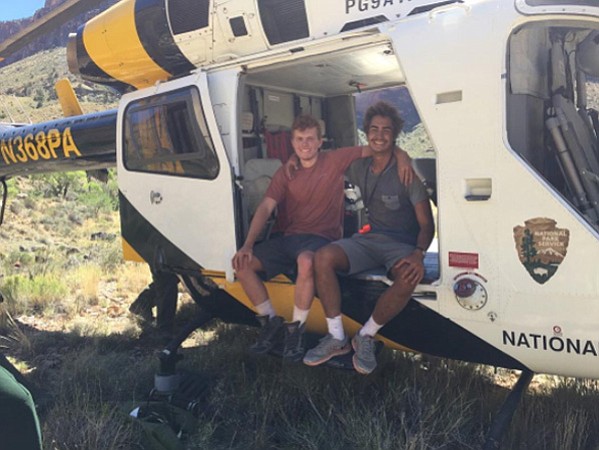 Reese McMichael (left) and Rowan Fitch recovering after being rescued by NPS rangers. Fitch posted the photo to his Instagram account. The caption says “For 5 days we rationed 2 granola bars and drank water out of a puddle on the ground, we had no tent or sleeping bags either, we just slept on the ground.” (NPS Photo)

GRAND CANYON, Ariz. — After spending five days at the bottom of the Grand Canyon, Reese McMichael and Rowan Fitch were rescued by park rangers who just happened to be crossing the area in a helicopter.

The two 18-year-olds were extremely lucky.

Fitch and McMichael had set out from their homes in Jacksonville, Florida, a week earlier, headed for the west coast, sharing one last, big adventure before starting college. On the way, the two decided to take a day hike to the bottom of the canyon before heading back up and on their way — something park rangers never advise, especially in the heat of the summer.

Near the bottom, Fitch and McMichael lost the trail and found themselves without water and only a couple of granola bars between them. Temperatures at the bottom were over 100 degrees. After realizing they had lost the trail, Fitch told ABC News the two tried to free climb a mesa, only to realize they were rapidly running out of energy and would likely die without water.

They headed back down to the bottom where they hoped to follow a dry river bed to the Colorado River and locate a ranger station. When they found a source of water and a shady overhang, Fitch and McMichael lay still to conserve energy.

“We found a few areas where water would just barely trickle out of the ground,” McMichael told the station.

The teens had been hunkered down by the water source for four days when they were rescued. They carefully rationed two granola bars between them. To help rescuers find them, they constructed a large arrow with rocks pointing to their location.

“We had phones, but there’s no cell service down in the canyon,” Fitch said. “You just start to think ‘what happens if no one comes to get us?’”

McMichael said he and Fitch felt “a tremendous sense of relief” when they were finally able to wave down an NPS helicopter.

Relying on a cell phone in remote areas like the Grand Canyon is risky, since map applications aren’t always updated frequently and many don’t show smaller trails. In March, another hiker was rescued after being stranded for five days on a very remote stretch of the Havasupai Reservation several miles west of the South Rim. Amber VanHecke had followed instructions on her phone’s map app, which sent her down a road that no longer existed.

Park rangers advise all hikers to carry or download trail maps and guides before heading down the trail and not to rely on having cell phone reception. They also recommend telling someone about hiking plans, including when you plan to leave, what trails you’re using and when you plan to return.