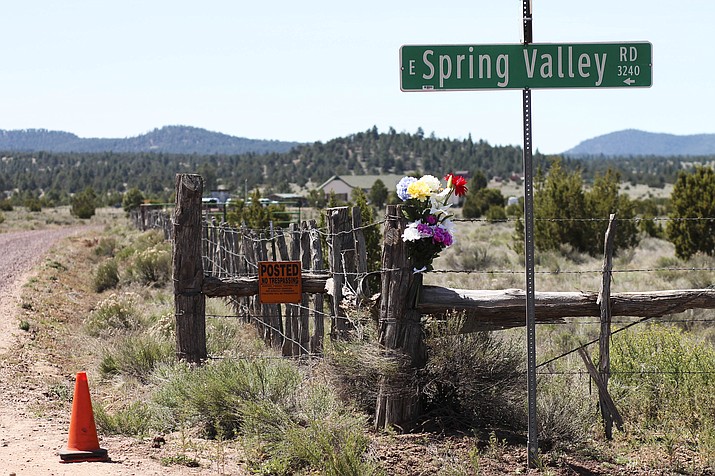 Michael and Nora Dimuria were murdered at their Red Lake residence May 2.

Derrick Barnett, accused of a double murder May 2 in Red Lake, came to Williams because he was hiding from Colorado law enforcement officers, according to newly released Sheriff’s documents.

Coconino County Sheriff’s Office (CCSO) had released some portions of the report regarding the deaths of Nora and Michael Dimuria in Red Lake at a community meeting May 6, four days after the incident. CCSO released more details to the public Aug. 29.

He pled not guilty to the charges Aug. 14.

Barnett was extradited to Arizona July 24 after Gov. John Hickenlooper of Colorado signed a Governor’s Warrant for Barnett to be transferred to Arizona.

According to disclosure documents, the county attorney plans to call 37 family and acquaintances of Barnett's. This includes Barnett’s father, David Martinez, his mother Robbin Laws, his ex-girlfriend Breawna Wilkins and 13 residents of Williams.

Barnett was in contact with many family members the weeks before and after the murders. Those witnesses listed from Williams include friends and acquaintances of the Dimurias, health clinic workers, reporting parties and possible acquaintances of Barnett.

Nora and Michael Dimuria were found dead at their home May 2. Investigators believe Barnett had been burglarizing the house, but a timeline of events is unclear. According to the report, Barnett broke in through the back door and allegedly killed Nora Dimuria, her husband and the couple’s dog with a 9mm pistol or a .22 caliber firearm he had stolen from the house. He then stole the couple’s vehicle and fled to Colorado.

According to the sheriff’s investigative report, the husband of a friend of Nora was asked to do a welfare check of Nora when she failed to show up to work the morning of May 2. Nora had last been seen at the Williams health clinic around 10 p.m. the previous day.

When the man arrived at the Dimurias’ around 9 a.m., another vehicle driven by a contractor was pulling in at the same time.

The contractor and the friend approached the backdoor of the home, which was the most common entrance, and found a broken window and an open back door.

When they entered the home they found a dead dog in the kitchen and Nora’s body in the bathroom next to the kitchen. The report said Nora was wearing scrubs, had a flashlight in her hand and a set of keys were lying nearby.

The two witnesses exited the home and called 911. Responding deputies secured the residence and began interviewing the witnesses.

After the scene was secured, Michael’s body was found under two throw rugs outside the guest house on the Dimuria property. Bullet casings were found near both bodies and bullet holes were found in several walls and the kitchen window.

Neighbors were interviewed with several saying they had heard gunfire during the night, but had not investigated since target shooters are common in the area.

After officers issued an Attempt to Locate May 2 at 10 a.m., CCSO received several tips about who was possibly involved.

On May 5, as officers processed evidence and interviewed witnesses, CCSO received a tip about Barnett being a possible suspect and having connections to Cortez and Grand Junction, Colorado.

Officers contacted the Cortez County Sheriff’s Office, who said they were familiar with Barnett as he had lived in the area and had prior interactions with the agency.

Family of Barnett’s had seen him in Cortez the morning of May 5 and knew he had a 9 mm pistol and .22 caliber rifle. The report said they had seen him driving an older Dodge Ramcharger. Their conversations with Barnett led them to believe he was in trouble and was going into hiding.

Officers believe that Barnett came to Williams to avoid prosecution for domestic violence charges he was facing in Colorado involving his ex-girlfriend.

According to Barnett’s father, David Martinez, a resident of Williams, Barnett told him he wanted to transfer his probation from Colorado to Arizona as he was not getting along with the mother of his children.

Approximately two weeks prior to the homicides, Martinez drove to Colorado and brought Barnett to Williams. Martinez allowed Barnett to live in his travel trailer on Forest Road 71 near Kaibab Lake, but soon realized Barnett had not contacted his probation officer and was actually running from the law.

Martinez tried to evict Barnett from the trailer but an altercation ensued at the trailer the night of May 1. That was the last time Barnett was seen by Martinez.

According to court documents, Barnett has a lengthy criminal record in Colorado.

Coconino County Sheriff’s Office said Barnett had up to five warrants for his arrest when he was arrested in Cortez after the murders.