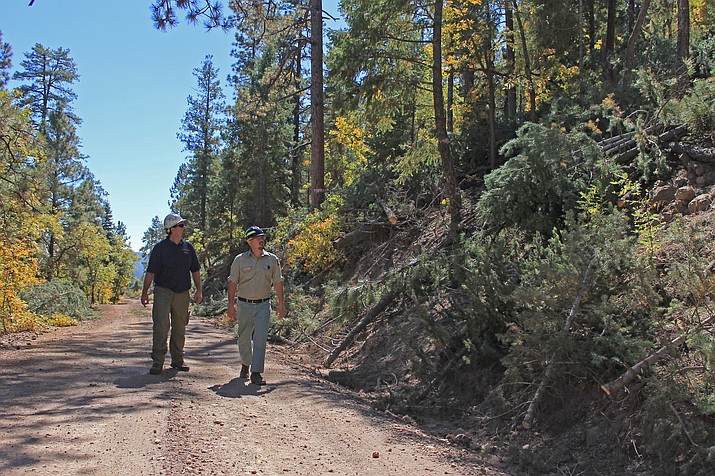 Mike Uebel, Justin Schofer and Josh Giles are all part of the implementation team for the Bill Williams Mountain Project. The project aims to restore the mountain to pre-settlement conditions.

“Those are challenges for us,” said Uebel, the assistant fire management officer for Kaibab National Forest. “How to get that a little more open.”

Uebel and Giles are part of the implementation team for the Bill Williams Mountain Restoration Project that was approved in 2015. The team has been working on executing the

plan in an effort to restore the mountain to pre-settlement conditions.

It all comes down to fire hazard potential,” Uebel said. “We don’t want a fire that burns so hot over the mountain, that it burns everything up and devastates the watershed to the city.”

The project aims to thin approximately 15,200 acres of dense vegetation on Bill Williams Mountain with traditional commercial timber harvesting and stewardship contracts, but will require more intricate hand felling, ground base logging and helicopter logging because of the steep, varied terrain.

“This mountain has a lot of different topography, it’s not just a big mound,” Uebel said.

Although thinning on the steep slopes of Bill Williams is challenging, the forest service has already treated 700 acres with chainsaws, 200 acres with heavy equipment and completed prescriptions for 3,500 acres available as timber sales.

Uebel said the project has some flat areas for timber harvesting with heavy machinery, but the steep slopes and protected wildlife habitats require thinning by hand.

“That’s the thing about Bill Williams, it is really rocky and has a lot of complexity to it,” he said.

Uebel said coordinating the work on Bill Williams Mountain has been a challenge. There are only a few in the logging industry who are capable of helicopter logging and thinning in adverse conditions.

“Most of the steep areas we’ve had to walk in and hand thin it,” said Giles, a supervisory forester with Kaibab National Forest. “These are areas without timber sales, because they are too steep or have another resource concern such as a protected wildlife habitat.”

A unique aspect of the project is the use of strategic partners to accomplish the restoration. Since much of the project encompasses small diameter trees with little market potential, the forest has contracted with groups like the National Forest Foundation and the Nature Conservancy who have a specific interest in restoring forests.

“The National Forest Foundation supports the Salt River Project,” said Justin Schofer, a biologist with Kaibab National Forest. “We are treating the upper parts of watersheds that flow into the Verde and Salt River.”

Josh Giles consults with a forest contractor on a unit being thinned on Bill Williams Mountain.

Uebel said the project has two focuses that managers use in their decision making. One is treating the forest around the base of the mountain to slow the progress of a fast moving wildfire.

Their second focus is protecting the surrounding watersheds.

Uebel said with so many small trees touching and the broad upslope, a fire would most likely burn very hot through the canopies of the trees, causing extensive habitat loss.

“It would burn everything off of the surface so you don’t have any logs or pine needles or grass that actually hold the soil together,” he said.

Uebel said after a heavy monsoon, water, soot and soil would gain momentum and flow down the drainages of Bill Williams Mountain.

“So, it would be a danger to anyone downstream,” he said. “Not even just town. It would go through town into Cataract Canyon and into Havasupai. It would be devastating to multiple communities.”

Six watersheds begin on Bill Williams Mountain, including Sycamore and Hell Canyon watersheds to the south and east, Cataract Creek and Spring Valley watersheds to the north and Ash Fork Draw and Upper Partridge Creek to the west. The city of Williams relies heavily on three of these watersheds to provide clean and abundant water to the local reservoirs as their municipal water source.

“People think about the fire, the burning of houses and then the fire moves on,” Uebel said. “But really it’s the effects after the wildfire that truly are the most damaging.”

“There are some unknowns about how to treat this mountain, but what is known is what happens when a high severity wildfire burns up a watershed,” he said. “It happens every year in the Southwest,” Uebel said.

Kaibab National Forest has recorded 366 fires over the past 40 years in the dense forest of Bill Williams Mountain and forest supervisors say it’s just a matter of time before the residents of Williams experience a catastrophic fire in their backyard.

Many residents remember the 2009 Twin Fire on Bill Williams Mountain that burned roughly 1,000 acres, closed local schools and required evacuation of 64 Williams homes. That fire along with the Eagle Rock Fire on Sitgreaves Mountain and the Schultz Fire on the San Francisco Peaks in 2010, prompted the need for immediate treatment of Bill Williams Mountain. The high-intensity wildfires of the Eagle Rock and Schultz fires led to flooding, erosion, and sediment problems as well as damage to landscapes and habitats. A child was killed in the subsequent flooding caused by the barren landscape.

Forest supervisors say a catastrophic wildfire on Bill Williams Mountain could cause the same damage as fires such as the Schultz or Aspen Fires.

Giles said people can expect to see variations in the restoration project units.

“All the areas will look different when completed,” he said. “Some will be dense, some will be wide-open. It depends on wildlife concerns, the type of trees and how many trees.”

The forest service stated there is no timeline for completion of restoration of Bill Williams Mountain. Uebel said treatment of the mountain is just beginning and forest managers hope to maintain the forest indefinitely.

“Even though you may not see work happening all the time, work is happening and there’s a lot more being planned,” said Public Affairs Officer Jackie Banks.