Searching for the Mogollon Monster 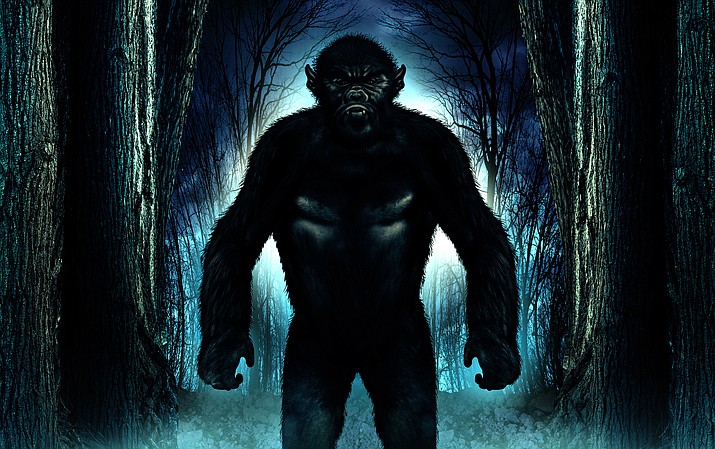 GRAND CANYON, Ariz. — Imagine driving the lonely roads around the Grand Canyon after dark, or hiking its winding trails near sundown. Leaves rustle somewhere in the stillness and a murky shadow in the distance twitches ever so slightly.

It’s in these eerie moments that visitors and locals alike have reported seeing a towering, hairy, vicious creature stalking across the landscape, sometimes unleashing a blood-chilling scream unlike anything human. This beast has been dubbed the Mogollon Monster, and it’s been reported many times dating all the way back to 1903.

The first recorded sighting of the beast came in 1903, when I.W. Stevens told the Williams News:

“I saw … a man with long white hair and a matted beard that reached his knees. He wore no clothing and upon his talon-like fingers were claws at least two inches long. A coat of gray hair nearly covered his body, with here and there a patch of dirty skin showing.”

Stevens goes on to describe the creature’s face, which he called a horror, noting it was “seared and burned brown by the sun, with fiery green eyes.”

Stevens reported he was charged by the beast, who wielded a large club, and was ready to fire at it, when it stopped short of mauling him, distracted by a mountain lion on a ledge above. Stevens said he shot the mountain lion, leaving behind two cubs, but the strange creature had run away as he fired. As Stevens retreated and made his way back to his boat, he said he noticed the creature had returned and was making a meal out of all three mountain lions. When Stevens yelled at the creature from the safety of his boat, he said it fled up the rock ledges, but not before “he flourished his club again and screamed the wildest, most unearthly screech I ever heard.”

The Cedar, Colorado, hunter returned to his camp and subsequently home, where he speculated on the origin of the “wild man of the rocks,” as he put it.

Stevens told the News, “Tradition records that years ago, hostile Indians captured three men, bound them to logs far up the canyon, and cast them adrift upon the swollen river. It may be that this wild creature is one of those unfortunate men, who, by chance, freed himself and escaped death, but was made insane by his awful experience.”

There are no records of such an experience ever taking place, although in 1903, the Grand Canyon was still a wild frontier, and skirmishes occasionally happened between regional tribes and west-bound settlers.

Still, Stevens’ ordeal isn’t an isolated event — others have reported seeing a strange creature resembling Stevens’ original report over the years, although the details begin to vary.

The reported sightings have mostly occurred in the mountainous Mogollon Rim region of northern Arizona — hence the moniker — but sightings have been reported as far away as Prescott Valley and Clifton, Arizona.

Don Davis, who believed he encountered the Mogollon Monster on a Boy Scouts camping trip around 1944 near Payson, Arizona, studied sightings and tales of terrifying creatures of all varieties. Known as a cryptozoologist, a person who evaluates scientific evidence for mythical creatures such as Bigfoot, the chupacabra and the Loch Ness Monster, Davis recounted his tale.

“The creature was huge. Its eyes were deep set and hard to see, but they seemed expressionless. His face seemed pretty much devoid of hair, but there seemed to be hair along the sides of his face. His chest, shoulders, and arms were massive, especially the upper arms; easily upwards of 6 inches in diameter, perhaps much, much more. I could see he was pretty hairy, but didn’t observe really how thick the body hair was. The face/head was very square; square sides and squared up chin, like a box.”

Of course, these sightings are decades old, before the power of the internet placed evidence for or against the existence of such creatures in the hands of the Average Joe, no hiking boots or camping experience necessary.

But even as late as 2014, the Mogollon Monster is still being reported.

A sociology student reported to Cryptozoology News (take with a grain of salt, it is the internet) she was hiking the Canyon Point trail near Payson when she saw what she described as a “troll-looking creature” drinking from a pool of water.

The student said the creature “was human looking, no hair on it, but full of bumps. The eyes were kind of a brown-red. Thick big nose, small lips. No expression on its face at all. It then took off running like a person.”

The Mogollon Monster is described across many accounts as either large or human-sized, having green or red eyes, covered in white, gray or black-brown hair. Its origins are unknown, although visitors, residents and researchers seem to agree something slightly inhuman may be wandering amongst the Ponderosa pines of northern Arizona.