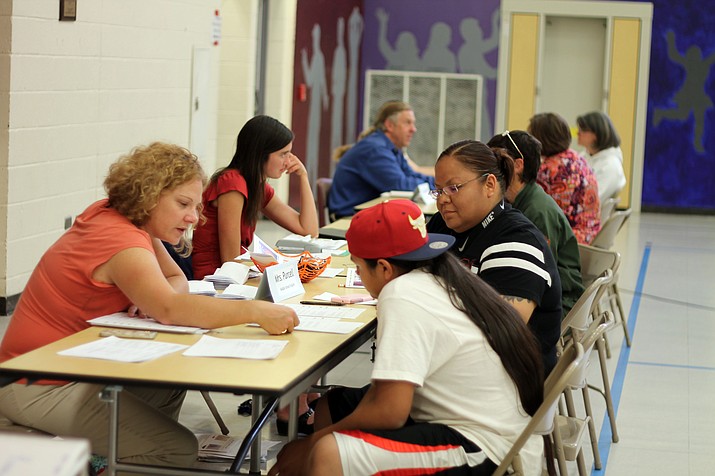 Grand Canyon Unified School District received a C. Under the old state standardized test, the school district had received an A, begging the question “What happened in four years to drop our score?”

The answer, it turns out, is complicated.

According to Principal Tom Rowland, a number of factors contribute to the way the grade is calculated, including factors beyond the school’s control.

But more importantly than getting that A, Rowland said, he wants to see Grand Canyon students making progress, even if that progress is slow.

About 21 percent of the school’s student body is evaluated and classified as students with special education needs, and that number could be higher once the district receives confirmation for a few students who are still being evaluated. That’s nearly twice the national average of 13 percent, according to the National Center for Education Statistics (NCES). Those students receive accommodations through their individual education plans (IEPs), which might include having an aide in the classroom to help them understand the material or receiving extra time to take a test.

Instead, the school, and to a lesser extent, ADE, takes into account how much growth its students make on a yearly basis.

Roland and Matt Yost, Grand Canyon’s assistant to the superintendent, also pointed out that the district has been utilizing a number of supplemental tools to help students progress, adding the AzMERIT test in itself doesn’t give them the feedback they need to assist students individually.

“The AzMERIT test doesn’t breakdown each section and lay out the individual standards a student is struggling with,” Yost said. “It just issues either a pass or a fail for each section.”

Yost said the district utilizes Galileo, a testing software designed to emulate the AzMERIT test to a close degree. The software breaks down an individual’s mastery of every sub-section within the overall test, allowing teachers and administrators to tailor tutoring and instruction to both individual and group needs.

Yost said that while a student may be having trouble with the math portion of the test, it may be only one specific thing he’s having trouble with, such as fractions. Based on Galileo results, that student’s teachers can offer him tutoring or re-teaching time based only on that one thing.

And if there is one standard that a large proportion of students are missing, Yost said the administration evaluates how effective instruction is on that particular standard.

“If I have a student who misses one problem, but has otherwise done his work correctly, then I know that it’s a small problem. He knows the method, he just didn’t get the correct answer,” Yost said. “If I have 80 percent of students failing to grasp a specific thing, all in the same way, then I know we have a larger issue that we need to address.”

As part of the school’s Beyond Textbooks curriculum, five-question exams, or formatives, are given on a weekly or bi-weekly basis, depending on grade and subject matter. These formatives are tailored to match up with AzMERIT standards, and it allows teachers to assess weekly, all year long, whether their students are grasping those standards.

Students who come to the district speaking English as a second language are tested the same as everyone else, according to Rowland, which can also drop the school’s overall score a bit. Those same students, however, also participate in an ELL program, and often the following year are able to fully participate. Since the grades are only given out every four years, it sometimes does not take into account the progress those students make once they are familiar with the language.