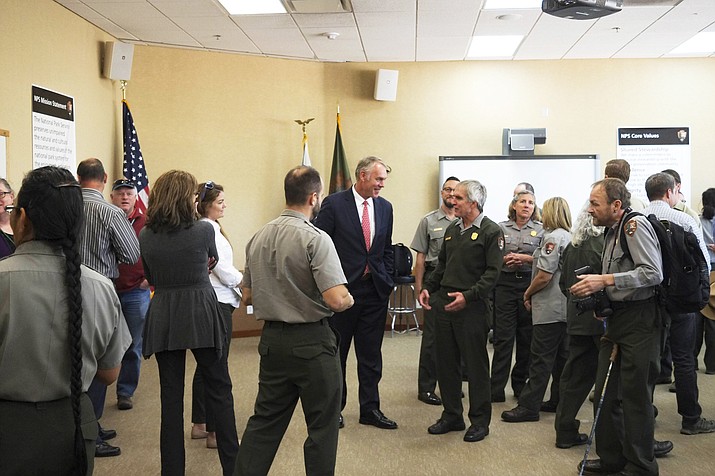 Secretary of the Interior Ryan Zinke addressed National Park Service employees before meeting with press about sexual harassment within the NPS.

GRAND CANYON, Ariz. — In a meeting with National Park Service (NPS) employees Oct. 13, Interior Secretary Ryan Zinke reiterated his commitment to stamping out what he called a virus in one of the country’s most notable organizations —claims of rampant sexual harassment in America’s parks.

“A culture that tolerates harassment and discrimination is absolutely unacceptable, to me and to the president,” Zinke said.

Zinke said the words zero tolerance had been an empty phrase in the past, with some in positions of leadership choosing not to act.

“Clearly there has been sexual harassment, intimidation and retaliation within the service,” he said. “That’s over. We’re going to root out this virus and put a new culture forward, a culture that embraces the best of the park service values, diversity of thought and teamwork.”

Interim NPS director Michael Reynolds was also on hand to discuss the results of a work environment survey, which asked employees to report if they had been harassed on the job, whether it related to age, gender, race, sexual orientation, disability or was sexual in nature.

The results of the survey were sobering, Reynolds said.

After reporting the results, Reynolds made clear that a culture change was in order for the agency.

“The survey makes clear that NPS has a significant problem with harassment,” Reynolds said. “A culture that enables harassment and hostile workplace behavior has infiltrated our organization. On behalf of the National Park Service, I want to apologize. It’s very much time for change, and it will start here and now.”

Reynolds said new guidelines to combat sexual harassment included new, required training for employees, policy changes and consistent discipline. He added that employees at all levels of the organization were being empowered to speak up and report harassment and abuses of power to address any occurrences quickly and thoroughly. New staff would also be added to help with investigations and addressing complaints.

Superintendent Chris Lehnertz, who was assigned to Grand Canyon National Park after the Inspector General’s investigation of sexual harassment hastened the retirement of former superintendent David Uberuaga and deputy superintendent Diane Chalfant, said the park has learned a few things after reviewing the findings.

“We learned, first, that trauma is real and has to be faced and reconciled to begin healing,” Lehnertz said. “The courage of the women coming together to have a voice and talk about what happened was a critical element in helping us to find out about the problem so we could act.”

Lehnertz also said the isolation of national parks, or even locations within a park, magnifies the opportunities for abuses of power that can lead to sexual harassment and a hostile work environment. The same isolation, she said, also has a tremendous impact on the victims experiencing the hostility, supporting the survey findings indicating nearly 75 percent of those who experienced sexual harassment did not report the behavior or file a complaint. Of those who chose not to report, 45 percent thought nothing would be done and one-third indicated they didn’t trust the reporting and discipline process.

“Culture doesn’t change just because you talk about it, you have to act,” Lehnertz said. “The first action is revealing the hostile work environment and harassment.”

Since learning about the magnitude of the problem, Lehnertz said the park has taken positive steps to change the culture, including working with the NPS ombudsmen’s office, which has created partnerships with universities and private sector organizations to help victims heal. The park has also implemented a zero tolerance program, which emphasizes train, correct and terminate procedures.

“If we find a predator in our workforce, we will terminate that person from the National Park Service,” she said.

Lehnertz confirmed nine firings at the park related to harassment in the past four months.

Zinke said he had fired four employees across the Interior Department for causes related to sexual harassment.

The original investigation undertaken by the Inspector General’s office was related to incidents at Grand Canyon, Yosemite National Park and Canaveral National Seashore, but a 2016 Congressional hearing found that sexual harassment is widespread within the country’s national parks, from large parks like Yellowstone to smaller sites like Wilson’s Creek National Battlefield near Springfield, Missouri.