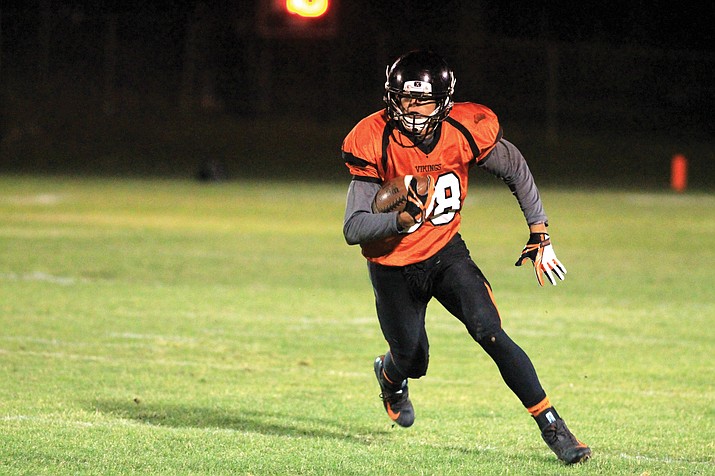 Zack Perkins carries the ball during a game with Greyhills Oct. 6

WILLIAMS, Ariz. — The Williams Vikings rolled over the El Capitan Eagles 70-14 Oct. 13, bringing an end to regular season play with a 6-2 record

“The meat of our schedule was at the start of the year,” head coach Jeff Brownlee said. “You’d like to see a tougher schedule throughout the year.”

The Vikings finished the season with only losses to Bagdad and Mogollon.

During the Eagles game, Diego Pedraza completed 10 of 13 passes for 171 yards.

Chance Pearson carried the ball 10 times for 167 yards, with his longest carry at 55 yards. Kolby Payne followed with nine carries for 35 yards.

Zack Perkins caught five passes for 126 yards with his longest carry at 45 yards.

Pearson had one interception for 10 yards, and made five touchtowns for the Vikings

Perkins had two touchdowns, and Mario Vasquez and Michael McNelly each made one touchdown.

Pedraza had 10 kickoffs averaging 42 yards, the longest at 50 yards.

The Vikings will have a first round bye this weekend.

“We’d like to have been higher than fourth, but with those beginning of the season losses, we didn’t have enough power points to get much higher,” Brownlee said. “

The team will face the winner of the Oct. 21 Mayer-Salome game.

“Those teams met earlier this year and it was pretty close,” Brownlee said.

The winner of the Oct. 28 game will face Mogollon in the semifinals Nov. 4 at 6:30 p.m. at Maricopa High School.

The championship game is Nov. 10 at Maricopa.

Brownlee encourages the community to come out and cheer the Vikings when they next play Oct. 28 at 6:30 p.m. at Williams High School.