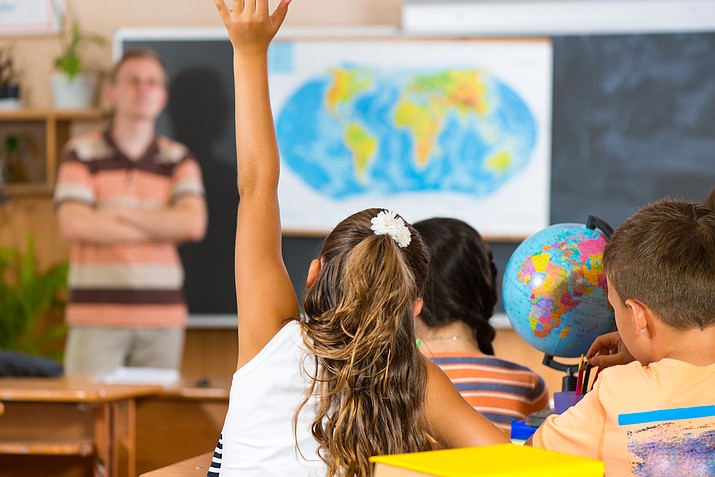 TUSAYAN, Ariz. — Grand Canyon School held a Title 1 finding meeting Oct. 10 to discuss what the district is doing to narrow the education gap in the community.

Title 1 funding is part of the Elementary and Secondary Education Act of 1965. Title 1 provides financial assistance to schools with high numbers or high percentages of children from low-income families to help ensure that all children have the same opportunities to meet education standards set forth by the states.

Grand Canyon, like other schools, receive their Title 1 funds based on the percentage of students who qualify for free or reduced lunches. The threshold for receiving the full allotment of funds is 40 percent, and Grand Canyon Superintendent Shonny Bria said the school averages about 55 to 60 percent on a yearly basis.

“When you look across the U.S. at test scores, the largest disabler is poverty,” he said. “Poverty is the biggest hindrance to a child’s education.”

In addition to serving a large percentage of low-income students, Grand Canyon also grapples with students facing language deficiencies and an above-average number of students who qualify for special education.

Rowland said the school uses Title 1 funding to ensure those students don’t fall farther behind. He emphasized that the funds are only meant to supplement the school’s curriculum, not supplant it. That means that the monies can be used to enhance learning opportunities, but not replace, for example, entire classes.

“For example, if I have a student who is failing a math class, I can’t take that student out of the class and put him in his own class with special instruction,” Rowland said. “What I can do is keep him in the math class, but provide after-school tutoring with materials meant to help that student succeed.”

And according to vice principal Lori Rommel and athletic director Cyndi Moreno, that model of supplementing the curriculum is working.

Rommel points to an intensive summer school session designed to help third graders who were failing to meet state standards in reading. The students were tested prior to attending the session and then tested again after they had completed it. A tailored curriculum was presented to the students that focused on the standards the children were missing. All but one student made gains, Rommel said, and the one student who didn’t broke even.

“This is proof that it works,” she said.

The school is looking at expanding the offering to include more students, such as advance second graders and fourth graders who may be in need of remedial teaching.

Last spring, the school also implemented the Zeroes Aren’t Permitted (ZAP) program. Under that program, students who don’t turn in their assignments are required to stay after school until the work is completed — no matter how long it takes.

Moreno said after the program was implemented, the number of students considered ineligible by the state’s high school athletics organization decreased by more than 50 percent.

And athletes weren’t the only ones benefitting from the program.

Rommel said the school runs the eligibility report for all students, not just the student athletes.

“We want to make sure all our students are doing well, not just our athletes,” she said. “We went from 40 students who were considered failing to only 11 this week, and not a single student athlete.”

Grand Canyon Unified School District receives about $57,000 annually in Title 1 funds. The district is allowed to carryover a certain percentage of the money annually, but otherwise it must be spent directly on student needs.

And the better the school district becomes at identifying student needs, Roland said, the more efficiently it can spend the funds.

Roland said the district is also looking at spending the funds on a single area of focus, rather than spreading it out over a number of programs.