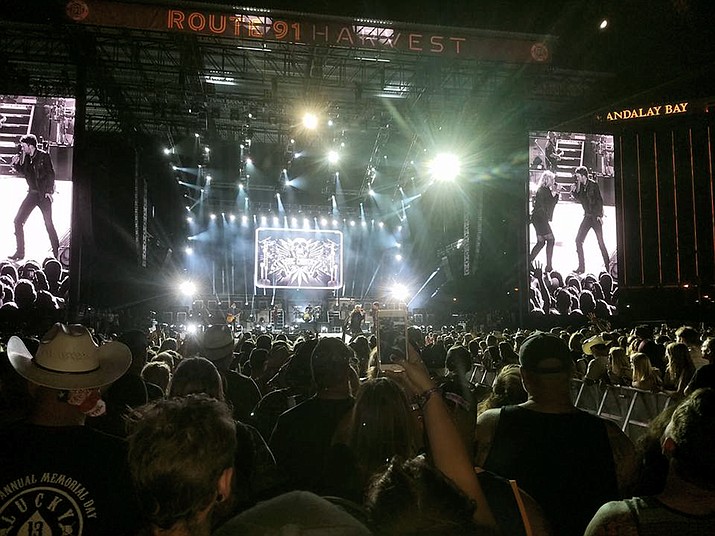 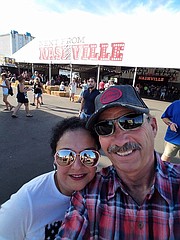 Anna Orozco and Brett Schwanbeck take a selfie prior to attending the Route 91 Harvest Festival Oct. 1.

WILLIAMS, Ariz. — “I think of him as a hero. I think he probably saved her life and I’m grateful to Anna because she’s the one who got him to the hospital so we could say goodbye … I appreciate her and I feel like she was our hero also for getting him out of that war zone,” said Robin Martin, sister of Brett Schwanbeck, one of 59 victims killed in a mass shooting in Las Vegas Oct. 1.

Brett and his fiancé, Anna Orozco, are northern Arizona natives. They had been planning on attending the Route 91 Harvest Festival in Las Vegas for several months.

“They were very excited about it,” Robin said. “They were big country music fans.”

Robin said they had planned to be in Las Vegas for the whole weekend, enjoying the city and the festival. It was what they liked to do — be in the outdoors and enjoy good music.

“(Brett) was a big hunter and fisherman,” Robin said. “He loved to go Razor riding and any kind of outdoor activity. He loved going to the lake and swimming and camping. He would do anything in the world for anybody and would travel anywhere just to do things for other people. He always had the biggest, kookiest grin on his face. Everybody called him ‘The Big Kid.’”

Anna enjoyed being with Brett. She was looking forward to planning the rest of their lives together. Robin said Anna and Brett had been engaged for about a year and had planned to be married this January.

“Anna loved doing those things with him. She loved going fishing with him and camping. Even though she’d wear her heels and (was) very girlie,” Robin said.

“They were just happy as can be. They had finally found what they were looking for,” she added.

Brett and Anna had gone to school together and had known each other for a long time. They both had children from previous marriages.

Brett most recently lived in Bullhead City but he had also lived in Ash Fork, Kingman, Flagstaff and Phoenix.

“He’s been all over Arizona,” Robin said. “He liked to hang out in Williams a lot.”

Anna lives in Cordes Junction, Ariz., but also grew up in the Ash Fork area.

Brett’s family is originally from Arizona and the family still has deep roots in the state. Both Robin and her mother were born in Williams. Robin currently lives in Payson, Arizona.

“My dad was born in Ash Fork, my mother was born in Williams,” Robin said. “Brett was born in Prescott. We grew up (in those areas) most of our lives.”

Robin said most of her siblings went to high school in Ash Fork, some graduated from Ash Fork.

On the evening of Oct. 1, Brett and Anna were enjoying the last night at the festival.

“(Anna) has told us many times about exactly what took place,” Robin said. “She said she heard what sounded like firecrackers or fireworks and then she saw a girl right next to her get shot and then another. She turned around and Brett was trying to get down. He had already been hit so she tried to stop the bleeding. At one point she was trying to get help and somebody tore down concert fencing and lifted him onto it.”

At one point Anna was forced to jump into a dumpster with another girl to try and protect herself until the gunfire quit, Robin recounted.

She said Anna, who works as a nurse, realized fairly quickly what was going on.

“She got back down and demanded people take Brett and put him in an ambulance,” Robin said. 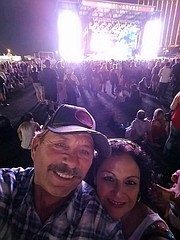 Brett Schwanbeck and Anna Orozco on the evening of Oct. 1 at the Route 91 Festival.

Brett was placed in an ambulance with two other people. Anna was not allowed to go with him because of the amount of people in need of immediate medical attention.

Anna was able to call Brett’s niece and her nephew who live in Las Vegas.

“Anna got to the hospital and she didn’t know what his condition was. He didn’t have his ID on him, so they had to wait until the next morning for her to even know where he was and what his condition was. They wouldn’t let her go in the ambulance because they needed the room. They were loading up two or three people at a time in ambulances,” Robin said.

Brett’s family was notified by Anna immediately. Once she arrived at the hospital, the family sat with her all night waiting for any word on Brett.

Brett was shot in the back of the head and in the leg, according to Robin. He passed away Oct. 3 at Sunrise Medical Center in Las Vegas.

During their time at the hospital, Robin said the care and attention given to the family from the hospital staff was outstanding.

She said Anna is back home and doing OK.

“She is a tough cookie,” Robin said. “She’s doing OK. She’s had an awful lot of tragedy in her life.

Brett was one of five children including two brothers — Bryan and Derek and three sisters — Robin, April and Loren. Their father, Robert Schwanbeck lives in Bullhead City and their mother, Carol Schwanbeck, and two of Brett’s brothers live in Kingman. Brett has two sons, Scott and Shawn Schwanbeck, who live in Phoenix and a daughter, Cassie Brown.

Brett was a retired over-the-road truck driver for ABF.

On Oct. 1, one of the largest mass shootings in American history took the lives of 59 people and wounded hundreds of others.

The shootings occurred at the Route 91 Harvest outdoor music festival in Las Vegas. At the time of the incident, country music singer Jason Aldean was performing.

According to reports from the Associated Press (AP), a gunman perched on the 32nd floor of a Las Vegas hotel-casino unleashing a hail of bullets on the music festival below, killing at least 59 people as thousands of concertgoers screamed and ran for their lives. More than 22,000 people were at the festival that evening. It was the last night of the three day festival. Around 500 others were injured in the attack.

President Donald Trump called the attack “an act of pure evil” and added: “In moments of tragedy and horror, America comes together as one. And it always has.”

U.S. flags were flown at half-staff to honor the victims.

Stephen Craig Paddock, 64, of Mesquite, Nevada was identified as the gunman. According to the AP, police said he was a retiree with no criminal record in the county in Nevada where he lived.

At this time, the shooting is under investigation. A motive for the attack has not yet been revealed.

“It is just absolutely devastating to everyone. Brett was not done living,” Robin said. “My heart goes out to all the other victim’s families that have had to take on this whole ordeal.”

Blocked hotel rooms will be available at the Ramada Inn, when making a reservation mention you are with the Schwanbeck party.

“Spread the word, let’s celebrate what an amazing man he was. Sharing all our wonderful memories we have of him. Let’s celebrate him as he would want us to. Anyone that wants to speak or tell a funny story will be welcome to do so,” Robin said.

More information or any special requests to speak can be made by contacting Shawn or Trisha Schwanbeck through their Facebook page.

A GoFundMe account has been set up at https://www.gofundme.com/in-memory-of-brett-schwanbeck. Donations to the account will help with expenses for traveling, funeral arrangements, loss of finances and more.