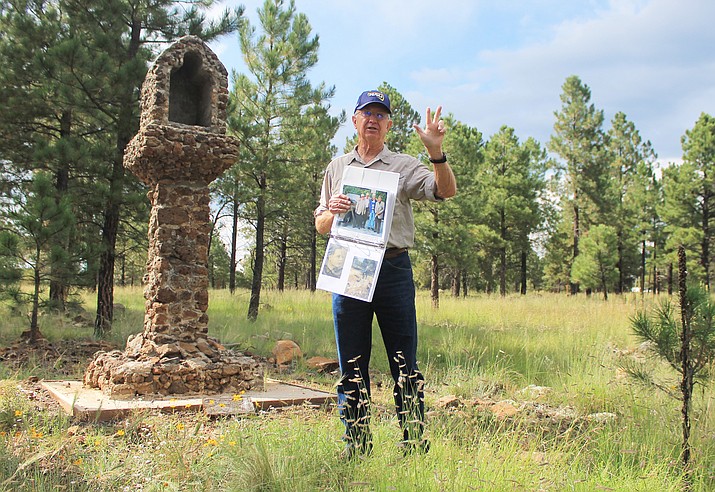 Author and historian John Westerlund stands in front a religious marker where POWs gathered for church services at the Navajo Ordnance Depot during World War II. The top of the monument held a crucifix.

The Navajo Ordnance Depot was built in Bellemont in 1942 as an ammunition storage location for the Pacific Theater of World War II.

According to researcher John Westerlund, who wrote the book “Arizona’s War Town — Flagstaff, Navajo Ordnance Depot, and World War II,” the civilian employment at the Navajo Ordnance Depot peaked at 2,172 workers in July of 1943. However, in the fall of 1943, workers were overtaxed because of the detailed work required to store the increasing variety of munitions that were being brought to the depot.

The depot was rapidly filling with munitions awaiting shipment, but it also became a dumping ground for munitions that needed repair.

As workers were struggling to keep up with processing, officers at the depot were disheartened at that time when the War Department announced a manpower ceiling in an effort to release more men for the draft.

This new order reduced the workforce at the depot by 45 percent, to just 1,200 workers. Morale plummeted, and camp commander Major Exum Myrick and his staff were devastated.

Around that time, Col. John Huling Jr. arrived at the camp to become the permanent depot commander. Known as a direct, stern, hard-nosed officer, Huling was experienced with ordnance work and set about improving the morale of the camp.

He gave the workers incentives such as better food, and empowered workers by allowing them to participate in decision making. He oversaw new field kitchens, a commissary, a recreation center with a bowling alley and a chapel. More roads and railroad tracks were added and a 54-bed hospital was completed.

Huling also began working toward finding more workers for the overtaxed depot. Additional recruiting on the Navajo and Hopi Reservations brought in a few more workers, but the depot was still woefully understaffed.

About 500 POW facilities were built in the United States, mainly in the South and Southwest where escape was less likely and favorable climes more cost effective. In Arizona, most POWs were sent to the large camps at Florence and Papago Park. Some POWS were sent to branch camps where they did agricultural work, mostly in the southern part of the state.

“The Army didn’t want to use steel or wood or concrete to build the camps,” Westerlund said.

Plagued by a labor shortage, Huling requested POWs from the War Department be sent to Bellemont to work at the depot.

In the spring of 1945, near the end of the war, Huling finally received relief for his strained workforce when 250 Austrian prisoners of war arrived.

Although some Flagstaff residents were concerned about possible escape and safety issues, Huling advised them most Austrian POWS were considered redeemable and not hardcore Nazis, since Germany had annexed Austria.

“Beginning in 1944, we began to separate Austrian soldiers from German soldiers at Florence,” Westerlund said. “If the Austrians would sign a document saying they will work and will cause no problems… then they could come up here.”

The POWs were held in the former Civilian Conservation Corps (CCC) camp on the northeast side of the base and assigned various non-military tasks around the base.

About 20 prisoners worked inside the POW compound, where most were cooks. A small number were also responsible for barracks maintenance, company administration, latrine maintenance or as barbers or carpenters. The POWs were not allowed direct contact with ammunition and were not allowed to go to Flagstaff.

Having it too good

The base followed the orders of the 1932 Geneva Convention and paid the prisoners 10 cents per hour, or 80 cents for a full day of work. To prevent prisoners from saving the money for an escape, the army paid them with canteen coupons or put the wages in a trust fund.

Huling and other officers often spoke at gatherings in Flagstaff and reiterated their command to follow the protocols of the Geneva Convention. The protocols were in place to protect prisoners from acts of violence, intimidation and public curiousity, but the army was also required to provide work for the prisoners with pay.

According to Westerlund, many of the prisoners enjoyed working at the base. The climate and mountains resembled parts of Austria. The proximity of prisoners and civilian workers resulted in fraternization at the camp. They especially enjoyed working at Indian Village, where they worked among families while they cut wood and dug irrigation ditches. The children were friendly and reminded them of home. Several of the POWs developed friendships with the Native American workers.

At the CCC camp,the POWs erected a stone and cement marker for religious services on the north side of the compound where they held outdoor worship services. The monument eventually crumbled and fell following the departure of the POWs but was restored in 2001.

Westerlund interviewed Papp, who visited the camp in 1998. Papp said “It was a nice time for us…a much better life than I had as a soldier. We had food; we were safe…I remember the beautiful sunrises and sunsets of Flagstaff.”

By the end of the war, Axis prisoners had been housed at more than 900 facilities scattered across the nation, leaving an indelible mark on the home front. The POW program helped keep many POWs out of trouble and provided some 200,000 workers to help with the severe labor shortage in the United States and free thousands of Americans to serve in the armed forces.