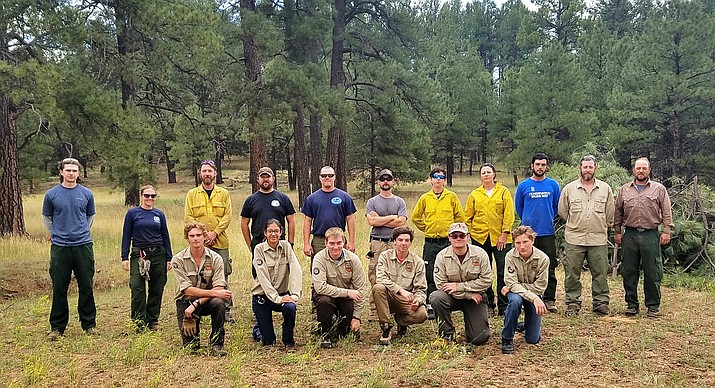 Kaibab National Forest hosted two Youth Conservation Crews this summer, one stationed in Williams and the other in Fredonia.

WILLIAMS, Ariz. — Over the summer, Kaibab National Forest (KNF) hosted two youth crews to accomplish projects, experience public lands, and learn skills and a strong work ethic, all while earning money and with the possibility of an education award upon program completion.

The Youth Conservation Corps (YCC) is a program coordinated through the Arizona Conservation Corps (ACC) that affords young people, typically 17- and 18-year-olds, the opportunity to perform community service and resource conservation through hands-on project work with a variety of land management and community partners, including KNF. As in past years, the Kaibab hosted two crews, one stationed in Williams and the other in Fredonia.

“When I think about the experience our YCC members get serving on public lands, I’m struck with what a great opportunity it is for them to develop a healthy relationship with work and service,” said Russ Dickerson, operations director for the ACC. “They get to work as a close team, come to understand that if they don’t give it everything they have someone else may have to pick up the slack, and see firsthand the lasting impacts that their service can have.”

The 2017 YCC program ran from June 5 to July 22. Corps members worked Monday through Friday from 7 a.m. to 5:30 p.m. and assisted with a variety of resource areas on KNF including range, wildlife, recreation, fire, archaeology, timber and silviculture. Both the Williams and Fredonia YCC corps members completed a remarkably diverse array of projects helping Kaibab employees with work they may not have otherwise had the time or person-power to accomplish.

The Williams YCC crew assisted range staff in removing a broken trick tank, which is a watering device for livestock or wildlife, and unneeded fencing material. Working with the recreation department, they helped maintain the popular Bill Williams Mountain Trail by using crosscut saws to clear fallen trees, and they helped clean out drainage ditches. Assisting silviculturists, they scrubbed aspen trees to remove damaging oystershell scale insects and helped monitor the condition of aspen stands.

“On the Kaibab National Forest, we take a multi-faceted approach to protecting our aspen, which are in decline due to a variety of factors,” said Josh Giles, silviculturist for the Williams and Tusayan districts of the forest. “The corps members helped us scrub off pathogens, cut encroaching conifers out of aspen stands in order to reduce competition, and monitor the progress we are making to protect this important species. We were able to teach them about the precarious state of aspen and the role we can play as land managers to help make a difference.”

Williams YCC corps members worked with fire and archaeology crews to thin and pile trees from the historic 1930s Civilian Conservation Corps interpretive site located near Barney Flat south of Williams. They also removed fuels and low vegetation from historic logging railroad grades across the Williams Ranger District in order to help protect the sites from future wildfires. Finally, they assisted biologists in removing crayfish, an invasive species, from Keyhole Sink. Crayfish are not native to Arizona, but they have become established in many waters throughout the state and endanger aquatic native species.

Fredonia YCC corps members accomplished an equivalently impressive list of projects during their tenure on the North Kaibab Ranger District. They worked with the range department to remove invasive bull thistle and old, unneeded fencing across the district. They assisted the timber and silviculture programs to mark boundaries for a timber sale while also being taught skills in map reading and GPS, plant and tree identification, forest health, and insect and disease identification.

All told, YCC corps members contributed a whopping 2,410 hours toward project work on the Kaibab National Forest that forest personnel likely would not otherwise have been able to accomplish. They also saw places that few people will ever see, experienced challenges that not everyone could overcome, and made investments in public lands that will endure for years or even decades.