Should mountain lions be hunted? Humane Society says no 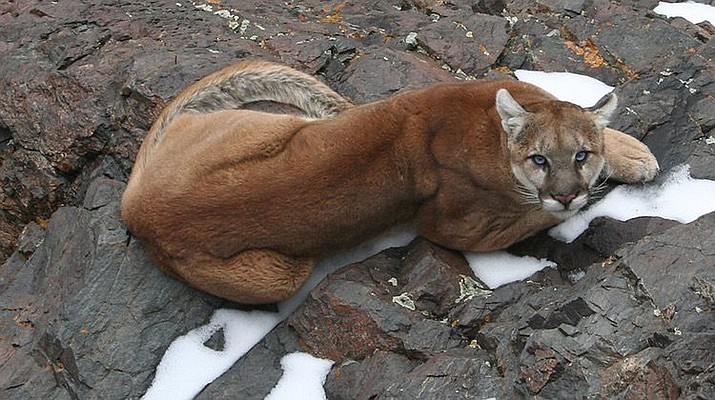 The Arizona Game and Fish Department estimates the mountain lion population is robust with about 2,500 throughout the state.

PHOENIX — Saying there’s no reason for “trophy hunting’’ of mountain lions, the Humane Society of the United States is moving to get Arizona voters to outlaw the practice.

The proposal for the 2018 ballot would make it illegal to pursue, shoot, snare, net or capture any wild cat. That specifically means bobcats and mountain lions.

As crafted, the ban also technically would apply to jaguars, lynx and ocelot, but those already are protected as endangered species.

“People no longer really tolerate trophy hunting,’’ said Kellye Pinkleton, the organization’s state director. “People are not shooting them, hounding them, trapping them for subsistence.’’

But Kurt Davis, a member of the state Game and Fish Commission, said the number of mountain lions killed each year — about 360 in 2015, the most recent numbers available — simply keeps the population in check and ensures that other species that are prey like bighorn sheep and pronghorn antelope are not decimated.

And Davis said he sees something more sinister in the measure: part of an effort to ban hunting entirely.

“We do not have any blanket opposition to hunting,’’ Pinkleton responded.

Backers of the ban on hunting big cats have until next July to gather 150,642 valid signatures on petitions to get the issue on the ballot.

The group and its local affiliate have a track record of sorts. In 1994 they succeeded in getting voters to approve a ban on the use of leg hold traps on public lands by a close margin of 3-2.

Pinkleton noted that initiative laws have since been tightened by the Republican-controlled legislature, with a ban on paying circulators on a per-signature basis and a requirement that all petition papers be in strict compliance with all election laws.

But she said her organization and other allies should be able to raise the $3 to $5 million it will take to force a public vote.

If it gets that far, it could be difficult to defeat. Davis said Arizona has a higher percentage of urban residents than any other inland state, meaning people less likely to go hunting.

What that means is the Game and Fish Commission and hunters will need to make their case that the practice should not be outlawed.

Davis said it comes down to science.

He estimated there are about 2,500 mountain lions in Arizona.

Each year the state issues more than 10,000 tags to hunt mountain lions. Davis said the commission’s experience is that, given the difficulty to actually kill one, that keeps the population in the 2,000 to 3,000 range, which he said is ideal.

She said the initiative would still allow killing of mountain lions in cases where they were endangering humans or where they were killing other animals, whether a rancher’s cattle or the bighorn sheep that have been reintroduced into the Pusch Ridge Wilderness Area near Tucson.

But the difference, she said, is that only the actual lions causing the problem could be hunted, versus simply telling hunters they can go out and start shooting them in the area to cut down on the population.

Pinkleton said there’s a good reason why the initiative outlaws only the killing of wildcats.

“These essentially are killed for trophies or for fur,’’ she said, and for bragging rights she said about killing a lion.

“This is not deer or elk where communities are using the whole animal, whether for the meat or whatever,’’ Pinkleton continued. “This is not a subsistence animal.’’

Davis takes exception to pushing the initiative as a ban on hunting trophy animals.

“The notion of trophy is a political notion that they’ve tested and polled,’’ he said, with no actual legal basis.

And Davis said if the test of trophy hunting is whether hunters actually eat what they kill, that would include the hunting of coyotes.

More to the point, he said it ignores that hunting is “a tool used by our state’s biologists ... to manage our state’s wildlife.’’

“Thank God ... that you have hunters, both men and women sportsmen, that are willing to go out and be part of the management tools to maintain healthy populations of all of our species,’’ Davis said.

According to Game and Fish, an average of 1,300 bobcats are killed each year.