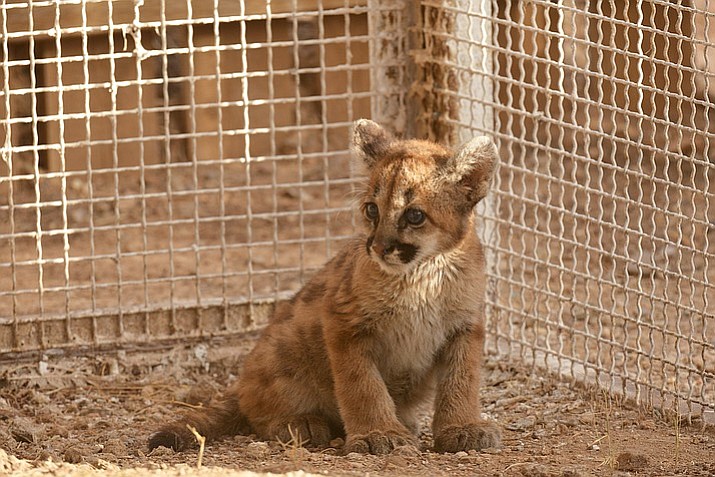 An orphaned mountain lion cub was picked up by AZGFD near the Verde River.

This is the mountain lion cub was originally found in Cornville, Arizona. Now she is under the care of Arizona Game and Fish Department. (Photos courtesy of AZGFD)

This is the mountain lion cub that was found a few weeks ago in Cornville. Now approximately eight-weeks-old, she is under the care of Arizona Game and Fish Department.

The cub was spotted by Cornville residents and reported to AZGFD on three separate occasions.

“Each time, the reporting residents did the right thing, leaving the animal alone, because the mother of a young animal is typically nearby. In this case, the mother never returned after two weeks and biologists determined that in this situation, it was best to intervene,” AZGFD said.

The cub was picked up by AZGFD from licensed wildlife rehabilitator Billy Harvey at the Runnin’ W Wildlife Center in Cornville.

Harvey cared for the orphaned mountain lion after it was found abandoned near the Verde River.

The mother did not come back and the cub was falling over, which is a sign of dehydration, explained Harvey. She was also plagued with parasites. But the cub began to get stronger.

Harvey didn’t know how long the mountain lion would be in his care.

“It’s really the property of the Game and Fish Department and they are looking at their options of placing it whether it be out of state in a release program or staying permanently in captivity,” he said.

The cub was transferred to AZGFD Nov. 3.

To determine the overall health and condition of the cub, it was given a full examination by veterinarians at the Arizona Exotic Animal Hospital. She was found to be in poor-to-fair health.

“Mountain lions are truly resilient animals, but this one likely would not have made it without human intervention and specialized care at the Wildlife Center,” said Mike Demlong, AZGFD Wildlife Education program manager. “When we received the cub, it was lethargic, severely dehydrated and emaciated. She needed help immediately. We’re currently doing everything possible to improve the health of this cub and give her the strongest chance for survival.”

The cub was picked up by AZGFD from licensed wildlife rehabilitator Billy Harvey at the Runnin’ W Wildlife Center in Cornville, Arizona. Harvey cared for the orphaned mountain lion after it was found abandoned near the Verde River. (Vyto Starinskas)

The department said the cub will remain with AZGFD until a permanent wildlife sanctuary, wildlife park or zoo can be found to give it a forever home.

Unfortunately, because it was orphaned it cannot be returned to the wild, explained the agency. Mountain lion cubs spend a year or more with their mom learning critical survival skills; this cub will not have that opportunity, said AZGFD.

“Helping injured wildlife — and especially baby wildlife — is the best part of my job,” Demlong said. “In regards to this mountain lion cub, I know I’ve made a difference. It’s rewarding knowing that we’ve taken an animal that was nearly dead and with time, good nutrition and care we’re able to turn it into a rambunctious, playful mountain lion cub.”

How you can help

Providing a fighting chance for wildlife needing a helping hand isn’t anything new for the AZGFD Wildlife Center, but such a rescue can often be costly, said the agency.

To provide better care for sick, injured, orphaned and confiscated wildlife, AZGFD is planning to build a new wildlife center at the department’s headquarters in north Phoenix. With limited funding available for the project, the department is seeking the public’s help.

The public can donate to AZGFD’s ongoing “Be a Hero for Wildlife” donation campaign and assist many different species of wildlife in need by texting CRITTER to 41444 from any smartphone or visit www.azgfd.gov/WildlifeCenter.

In addition to donations, the public can also help keep wildlife wild by leaving baby wildlife alone. The situation with this cub is an exception, but in general baby wildlife is rarely orphaned or abandoned. One or both of its parents is likely nearby searching for food and will return.

For more information on Arizona’s diverse wildlife or the Wildlife Center, visit www.azgfd.gov.