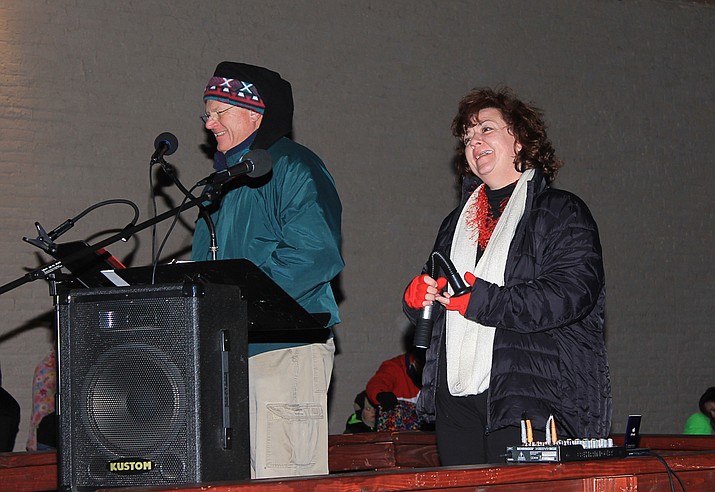 Kerry-Lynn Moede and her husband, John, entertain the crowd at the 2016 winter parade. Kerry-Lynn will sing at the third Advent concert at St. John's Dec. 10.

Kerry-Lynn Moede, Billie Jene Watt and Beth LaGro will entertain with Christmas favorites at the eventt for the Williams community.

St. John’s sponsors the concert series each Christmas season with 2017 being the eighth year.

Kerry-Lynn Moede is a fourth generation Arizona native, born in Show Low. She and her husband, John, have had a home in Williams for 13 years, and have lived here full-time for the last two years.

Kerry-Lynn has been singing publicly since the the age of six. She enjoys singing jazz, Broadway, country, pop and Christmas music

She has performed in restaurants, festivals, art shows, stage musicals, television and was recently selected by Princess Cruise Lines as "The Voice of the Seas." When not singing, she operates the Historic Yellow House vacation rental.

Watt and LaGro will accompany Moede.

Billie Jene (Nagiller) Watt is a 4th generation Arizona native, born in Williams. She began piano lessons at age 7 and has continued to play throughout her life. After graduating from Williams High School, she pursued a degree in elementary education with a music emphasis from NAU. She graduated from there with a Bachelor of Science in Education in 1973. She taught music in the Tempe Elementary School District four years. She received a MA in Education in 1977 and her Doctor of Education in 1995, both from ASU. She taught music in the Kyrene School District in Tempe from1982-2012, when she retired. While in Kyrene, she was responsible for teaching general music to 550 students in grades K-5. She was responsible for organizing and directing school music programs and was trained in the methodologies of Orff, Kodaly, Laban and Dalcroze. After retirement, Billie Jene and her husband, George, moved to Williams. She remains active with music by playing piano/keyboard for various local church groups and community musical productions.

Beth LaGro moved to Williams in 2015, after living in the Chicago area for 36 years. Like Billie Jene and Kerry-Lynn, music began in her life at an early age with piano lessons at age 7, while growing up in Wisconsin. She continued with piano studies through school, college, and after college with her piano professor, and also added in voice studies at the Conservatory of Music at Lawrence University while obtaining a degree in Spanish. Flute was added in 5th grade and continued to be a part of her love of music, playing with church choirs whenever possible. She spent many years also accompanying her daughter, a voice major, and playing piano and organ at the Millburn Congregational Church (Illinois) as a substitute. She continues her love of music here in Williams as the pianist/organist at St. John’s, along with playing the flute for special occasions.

Please join them as they serenade you with some of your favorite carols and Christmas songs on December 10th.