Letter to the editor: Response to the public statement concerning the Nov. 7 election results 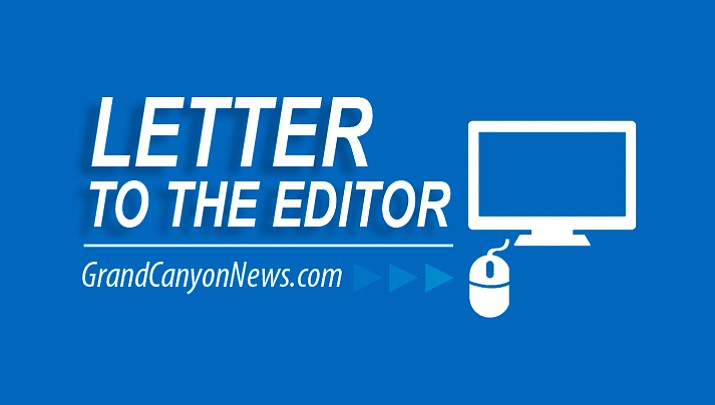 First and foremost, thank you Tusayan voters for voting and caring for the Tusayan/Grand Canyon area. The height referendum, and the very little discussion had prior, was concerning. Especially with the unknown heights and densities that could have been with the CUP (FAA approval) language that the town passed.

In the Town of Tusayan’s public statement from Mayor Craig Sanderson he mentions that, “Ballot measures can, at times, have the benefit of helping elected officials feel the pulse of the people that we represent.” But by the next sentence, and throughout the rest of the letter, he is nothing but negative and puts those people/entities down.

Mayor, and Council, you represent all of the people of Tusayan. Those 71 people, that didn’t vote for the height increase, they are your constituents too and you don’t seem to care about their opinion.

It is unfortunate, Mayor, that your employer, the largest in town by far, does have very old housing. Old trailers, RVs and very small dorm rooms. I do see why your town council, all employed by Elling Halvorson, wish they had something else. Elling Halvorson should put real money into quality affordable housing for his staff, like the vast majority of large employers in Tusayan have done. But if the town will pay millions and millions of dollars to build it for Halvorson/Stilo instead, why would they?

The campground when rezoned, about six years ago now, was supposed to be interim housing for anyone that wanted it and the units could be moved later to other parcels. I have heard that only one individual did buy their own housing unit there. All the rest have ended up being company housing once again.

With the campground and other land that Halvorson/Seibold and Red Feather has in the developed area of town and much already zoned residential, why doesn’t the town offer to buy this land and offer housing sooner? Because it doesn’t benefit Stilo for the Kotzin and Ten-X properties to do so. Your town council has many options for other housing, not associated with your job, which they could work on but they choose not to.

In articles, I have heard the mayor and town manager, Eric Duthie, talk about due process and respect for it.

Where was the due process when the town submitted a Forest Service application for a road to Kotzin coming off Long Jim Loop — when that road wasn’t in the town’s General Plan adopted just a few weeks before, or even in the Kotzin zoning approvals? It was quite a shock to discover that instead of coming off the second roundabout — as had been shown along the way — the high-capacity road had been moved through a residential enclave and the community park and school land, without a single public discussion about it.


It was not due process for the town and its commissioners and council members to allow Yes side signs to remain in the right-of-way in front of businesses they manage right up to Election Day. Eric Duthie was notified by Oct. 20, and the town has an obligation to enforce right of way rules but did nothing. I doubt this would have been the case if the NO side signs were illegally put in the right-of-way as the YES side did.

It was not due process when Clay Ann Cook (Planning and Zoning Commissioner) showed up about 40 minutes late on the night the commission approved the height increase — after public comments were done — seemingly because Eric Duthie told her they needed her vote on the height requirements. She apparently didn’t even know it was on the agenda or that there was an agenda for that night, but voted in favor rather than postponing until a night where she knew what was happening or being proposed.

Your letter shows, once again, that it is the town/Stilo/Halvorson’s way or the highway and that this election hasn’t made you stop and think at all. You continue to attack other agencies or parties, as you call them, for their opposition rather than consider changing anything. You don’t care about the Grand Canyon area, your purpose and legacy seems to get done whatever your boss and his partners want and not to listen to your constituents that actually live here.