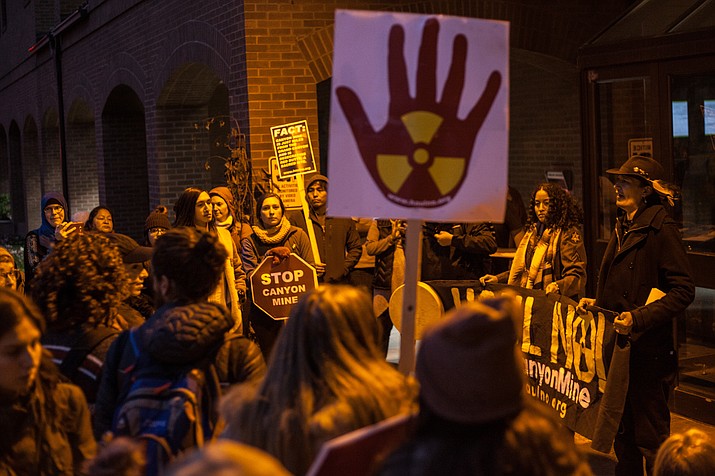 Members of Haul No! rally outside the Flagstaff Council chambers before the vote.

FLAGSTAFF, Ariz. — With about 100 people, many of them Native American, packing the council chambers Nov. 7, the Flagstaff City Council passed a symbolic resolution opposing transporting uranium through the city from Canyon Mine by a vote of 6-1.

Canyon Mine is located about six miles from Grand Canyon’s South Rim near Red Butte, a sacred mountain and traditional cultural property for the Havasupai Nation. The Havasupai Nation has legally challenged the U.S. Forest Service because of the failure of completing meaningful consultation regarding Canyon Mine in their 1986 Environmental Impact Statement. A decision from the 9th Circuit Court of Appeals is pending.

In June, Haul No!, a volunteer indigenous-led group working to stop nuclear colonialism in the Southwest, put a petition before the Flagstaff City Council which resulted in the vote Nov. 7.

Energy Fuels Resources wants to haul uranium from Flagstaff to the White Mesa Mill in Blanding, Utah. Though not final, one of the proposed routes for hauling the uranium, according to Haul No! would take it through Valle, Williams and Flagstaff; as well as through rural Navajo reservation communities including Cameron, Tuba City, and Kayenta; near the Hopi reservation, and finally arrive at Energy Fuel’s White Mesa Mill only three miles from the Ute Mountain Ute tribal community of White Mesa, Utah. One hundred eighty miles of the route is across the Navajo Nation.

Regional indigenous community members, including six representatives of the Havasupai Tribal Council along with representation from the Diné (Navajo), Hopi, Apache and Pueblo nations, were present to witness the passing of the resolution. State-wide solidarity was felt throughout the evening as Arizona residents from as far away as Phoenix and Tucson came to show their support for the council to pass the resolution, and to push for a future ordinance.

Tso said that he takes uranium mining personally because of his grandfather who is dying slowly.

“He was a mine worker and they weren’t educated on the dangers of uranium,” Tso said. Tso said the danger is not a question of if an accident will happen but when.

“My town, we are ill prepared for something like that, we are not trained on how to clean up a spill,” Tso said.

Leilani Clark, a volunteer with Haul No!, said she continuously travels up from Tucson to bring attention to the issue because she is one of the 40 million people who is dependent on the Colorado River for clean drinking water.

“Already just within the Grand Canyon region, there has already been 20 seeps and springs found with dissolved concentration of uranium above the safe drinking water standards,” she said. “That is unacceptable and we cannot continue for that to happen.”

Clark pushed the council not only to pass the resolution but encouraged them to pass an ordinance as well.

“Because we the people by any means necessary will do whatever it takes to prevent trucks, carrying poison through our communities,” Clark said.

Ophelia Watahomigie-Corliss, Havasupai Tribal council member, spoke on behalf of the Havasupai people. She said that for 40 years the Havasupai Tribe has consistently used whatever means necessary to oppose uranium mining on the Colorado Plateau.

“We see the mining of uranium and heavy metals in our areas as a threat to our waters, our land, our sacred sites and our very survival as a people,” she said.

The U.S. Department of Transportation is in charge of regulating the transporting hazardous materials and uranium ore and the resolution passed in spite of that fact.

Mayor Coral Evans addressed the constitutionality and legality of the resolution before the vote. “I would say in this country, historically, we have seen several laws over the course of time be changed or overturned because we, the people, have determined that they were unjust,” Evans said.

She said the legacy of uranium mining in northern Arizona is unjust and that is shown through the route that the ore will take.

“I believe it is clearly shown through the levels of cancer and cancer related deaths experienced by the indigenous people in our region,” Evans said. “We have indigenous neighbors that have been fighting and asking for relief on this issue for decades, for generations.

While Evans asked the council for a 7-0 vote, the final vote was 6-1. Scott Overton opposed the resolution.