Weather in Williams: La Niña winter on the way 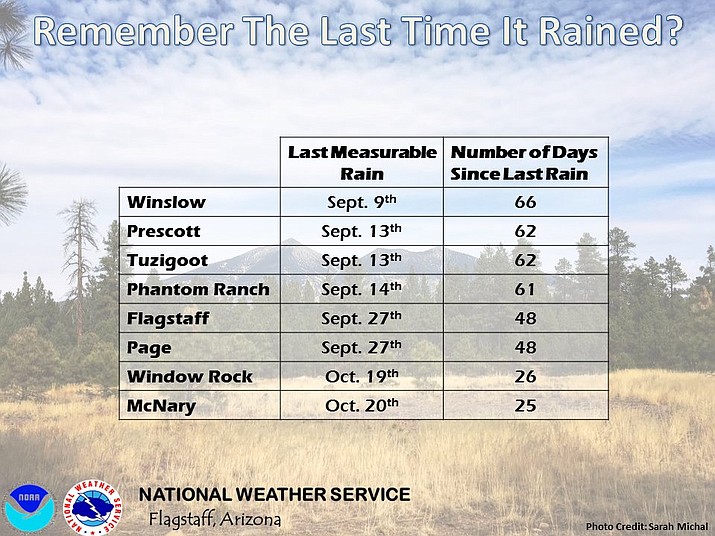 Unseasonably warm temperatures have hovered over northern Arizona for the past two months with no end in sight, according to the National Weather Service, as high pressure dominates the weather system with no precipitation in the forecast.

The average low for October was 37.9 degrees. The typical average low is 35.7 degrees, a 2.8-degree difference.

The average precipitation for September and October is 1.82 inches and 1.60 inches respectively.

According to meteorologist Brian Klimowski with the National Weather Service in Bellemont, the unusual weather is a product of a persistent ridge of high pressure over much of the Western United States which has kept the area warm and dry.

September was the 51st driest year out of 120 years of data recorded.

“There is no identifiable reason for the lingering warmth and dryness,” Klimowski said. “It’s not that unusual for us to have a dry fall.”

The NWS said a long-wave high pressure setup over the southern Rocky Mountains with a trough off the Pacific coast made for a stable system that remained stationary over the area. As the air flowed into the ridge, the clouds evaporated, leaving the area with the clear skies, allowing the region to stay warm through this period.

Klimowski said La Nina is forecasted for the winter which could lead to a greater chance of drier than normal conditions and a significant chance of warmer than normal temperatures. Long range predictions show abundant precipitation in the Rocky Mountains and the Northeast and drier conditions in the southwest.

La Nina occurs when waters in the southern Pacific are cooler than normal. Variances in ocean temperatures often affect weather in other areas of the world by influencing the jet stream, the upper-level winds that direct storm systems.

Monsoons move Williams precipitation close to norm
After warmest winter on record in Arizona, monsoon could be a wet one
Williams experiences warm March weather
Is the drought over? El Niño delivers wetter than average conditions to the southwest
Weather or not!
Event Calendar