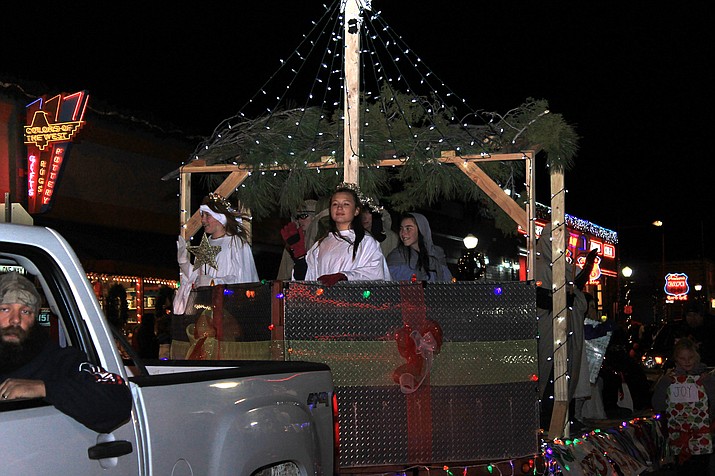 A 2016 Christmas parade float makes its way down the street in Williams.

The Williams Christmas Committee is now organizing for the Christmas parade scheduled for 6:30 p.m. Nov. 25.

The group is taking float applications for the parade through Nov. 15 and is asking for registrations for the annual residential and commercial lighting contest.

The Christmas Committee, headed by Bill Sutton, is planning the parade, holiday lights competition and other events throughout the holiday season.

“This year we added the word Williams to Mountain Village Holiday, and we have expanded it to now include four federal holidays: Veteran’s Day, Thanksgiving, Christmas and New Year’s, to take in all Polar Express nights,” Sutton said.

Sutton said they are doing the events for the residents of Williams and all the visitors who come for the Polar Express train rides and Bearizona’s Winter Wonderland.

“We are doing it for our citizens, young and old, and all of our visitors. We want Williams to be known as a Christmas town,” he said. “We have a unique and cool town. Let’s get the hundreds of people who are here anyway to come downtown and take in everything we have to offer.”

The group is still seeking sponsors and volunteers for the parade and lighting contest.

“The more help we receive in sponsorships, the more people get on board with decorating, being in the parade, and being a part of the festivities, the better it’s going to be,” Sutton said.

After the parade, the committee will host an official lighting of the new Christmas tree downtown.

“The radio station folks will be there announcing before, during, and after the event”, Sutton said, “We will have live music, dressed up characters giving out hundreds of Santa hats to the kids, and a number of surprises to make it a time of memory building and fun.”

The business and residential lighting contest judging will be the evening of Dec. 11.

“You have to enter to be a part of it. Entry forms are available at Pine Country, the Williams News, and Cowan’s 76”, Sutton said. “We have special awards for first, second and third places in both categories, and have included five honorable mention awards as well in each category. Let’s deck out the town like never before.”