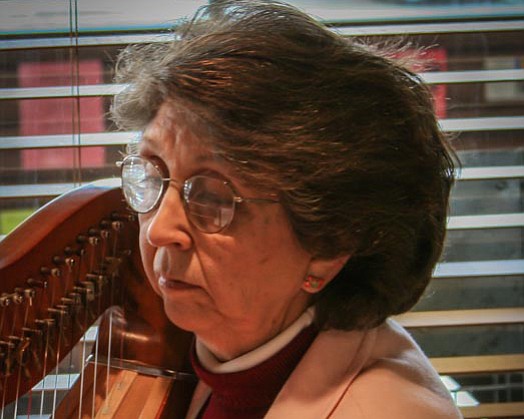 Carolyn Bame will play her harp in the first weekend of the Advent Concert Series.

Harpist Carolyn Bame will begin St. John’s Episcopal-Lutheran Church’s 8th annual Advent Concert series Nov. 26 at 4 p.m. Bame’s program will feature several classical pieces, a group of Celtic pieces and close with Christmas Carols. The entire concert series is free and all are welcome to enjoy this gift of music.

Bame grew up in Indiana in a musical family. She received her Master’s in Music in Vocal Performance from Northern Arizona University (NAU) in 1972. She taught music and private piano lessons for many years and moved to Flagstaff in 1966. In 1971, her husband, Charles, built a 26-string harp, topped it with a big red bow, and placed it under the Christmas tree, surprising his wife with it on Christmas morning. His gift fulfilled her life-long desire for a harp, and the start of a real love affair with the instrument.

Bame became the Director of Music at Trinity Heights United Methodist Church in Flagstaff in 1985.

In 1997, Bame began bringing her harp to the hospital to play for patients. She became a Certified Music Practitioner and began playing at the hospital. To provide music that was suitable, she began doing her own arrangements and writing her own compositions. With the assistance of others at the hospital, the Music at the Bedside program was established. Her composition work also continued over the years and resulted in over a dozen books being published for the program and similar hospital music therapy programs.

Her work has also made her passionate about promoting peace.

“There is so much in our American life that is geared to pressure and haste and competition and ‘Me first” thinking, especially in the music we hear everywhere. ….I have to think that bringing peaceful music into our lives is a beginning, Bame said. "It opens a possibility for teaching peace — ways of relating to one another peacefully on a day-to-day basis. And even if all I can do is bring a few minutes of peace to a few people who hear the harp’s music that, in itself for me, is a small and rewarding contribution to peace in the world.”

The church invites the community to hear the harp sounds of Bame as she kicks-off the Advent season.