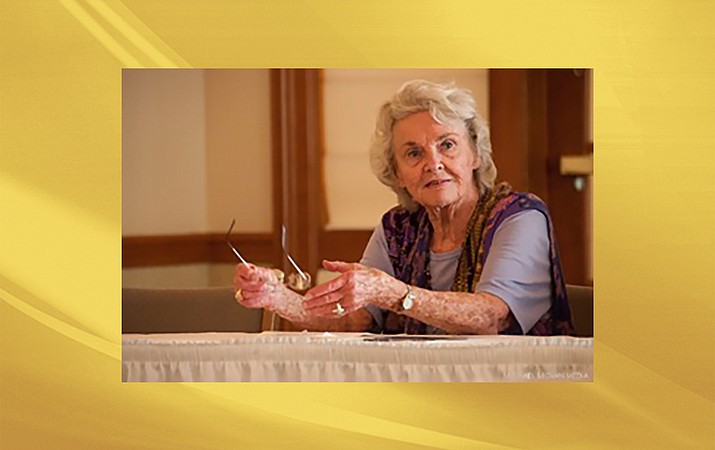 Actress and activist Katie Lee passed away at her home in Jerome, Arizona, Nov. 1. She was 98.

JEROME, Ariz. — With a career spanning more than 70 years, it’s easy to see folk singer, actress and author Katie Lee’s passion for the arts — a passion that was matched only by her love for Glen Canyon.

An Arizona girl from the beginning, Lee was born in Tucson and graduated from the University of Arizona with a bachelor of fine arts degree. With a love of adventure, Lee moved to Hollywood in 1948 to begin her stage and screen career. She played minor roles in a few screen productions, but easily found her home in radio, with running parts in major NBC radio shows, including The Great Gildersleeve, Halls of Ivy and The Railroad Hour.

Folk music was where Lee really shined. She recorded 14 original albums during her career while performing in cabarets and concert halls from San Fransisco to New York. She helped organize the Cabaret Concert Theatre, a Greenwich Village type folk music venue in Hollywood, which attracted friends and fellow artists Josh White, Burl Ives, and Carl Sandburg. Lee’s love for the Southwest featured prominently in her songs.

While she was touring the country as a folk singer, she interviewed cowboy songwriters and researched the roots of traditional cowboy songs, leading friend and fellow folk singer Ives to remark, “The best cowboy singer I know is a girl: Katie Lee.”

In 1976, Lee published what has become a classic book of cowboy lore through their songs, Ten Thousand Goddam Cattle: A History of the American Cowboy in Song, Story and Verse, written by Katie Lee and illustrated by cowboy artist William Moyers. She later recorded many of the book’s songs with the late Travis Edmondson. Lee also produced an award-winning film documentary, The Last Wagon, which celebrated the lives of Gail Gardner and Billy Simon, two Arizona cowboy legends.

Lee was well-known among her friends for mapping out hiking trails where one was unlikely to meet another living person, according to friend and fellow singer Diane Rapaport.

Between her numerous pursuits as an author and song artist, Lee fell in love with the Colorado River and Glen Canyon in particular. She took her first river run in 1953 from Lee’s Ferry, and continued exploring the river and side canyons until the Glen Canyon Dam was completed in 1966.

“I was a backpacking neophyte … I had never before spent a night that was not in a national park with groomed trails and signs telling me where to take a photo,” Rapaport recalled. “Katie took her mate Joey, my husband Walter and I, and her friend Merlin on a ten-day trip into Gravel Canyon, in Utah’s White Canyon area — possibly not traveled by anyone (including the cows) since the Native Americans left in the fourteenth century.”

Bitterly referring to Lake Powell as Loch Latrine or Rez Foul, Lee took up the fight as an environmental warrior and activist, fiercely advocating for the removal of the dam that flooded the area’s unique slot canyons and reduced the once-wild Colorado River rapids to a trickle. She chronicled her experiences in All My Rivers are Gone: A Journey of Discovery through Glen Canyon, which was later republished as Glen Canyon Betrayed with an afterward by Lee, who had become known as the Grand Dame of Dam Busting.

Katie Lee passed in her home in Jerome, Arizona, Nov. 1. She was 98 years old.