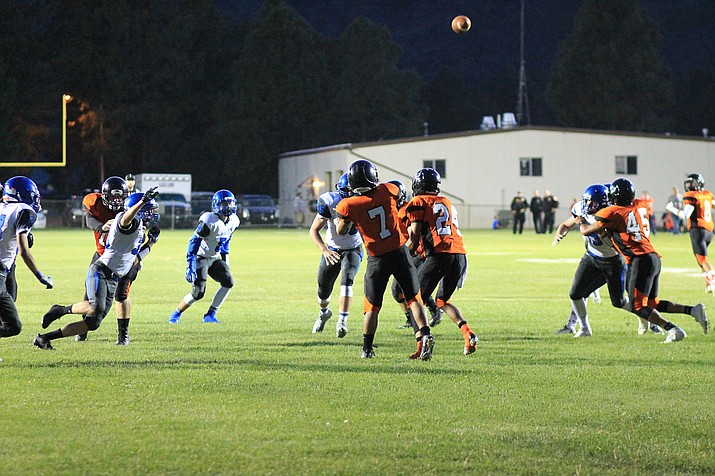 Diego Pedraza passes the ball during the Sept. 1 game with Bagdad.

Coming off the disappointment of a loss at the state championships in 2016, the Williams Vikings have come back with a vengeance in the 2017 post season to knock off Salome Oct. 28 and Mogollon Nov. 4 advancing to the 1A State championship game with Superior Nov. 10.

The Vikings beat Mogollon Saturday night 64-52 in a high scoring back-and-forth match with the number one seeded Mustangs.

“It was an exciting game,” Vikings head coach Jeff Brownlee said. “We pretty much controlled it, but Mogollon was always right on the doorstep again. Right when we would score, they would answer.”

In the Mogollon game, the Vikings got off to a good start with a faked punt that allowed Daniel Lopez to scamper 24-yards for a first down, followed by a 30-yard touchdown pass to Zack Perkins.

Mogollon answered with their own touchdown and two-point conversion to end the first quarter leading 8-6.

The second quarter saw aggressive offense by both teams as Williams hauled in 36 points with Mogollon following with 22.

“There were just fireworks on both sides in the second quarter,” Brownlee said.

Lopez brought in the first touchdown of the second quarter with a 28-yard run. Perkins carried in the second touchdown with a 29-yard reception followed by a two-point conversion.

Chance Pearson takes the ball for some yards in an early season game with Bagdad.

The Vikings defense meets during the Oct. 28 game with Salome.

Pearson then had a 1-yard touchdown run, with Lopez bringing in the two-point conversion.

Mogollon responded with two touchdowns, but the Vikings went into half-time fired-up following a Perkins 76-yard kickoff return and touchdown.

“It was an exciting game,” Brownlee said.

The Vikings left the half leading 36-30.

In the third quarter, Diego Pedraza connected with Lopez for a 76-yard touchdown followed by a David Lozano two-point conversion.

Mogollon scored and got the conversion to bring the score 44-38.

“We had a little breakdown on special teams that allowed Mogollon to return a kick for a touchdown,” Brownlee said.

Another Lopez run and Mogollon touchdown brought the game to 50-44.

“We missed our two-point conversion on that one,” Brownlee said.

With 3:50 left in the semifinal game, Pedraza pitched the ball to Chance Pearson, who passed 32-yards to Perkins for a touchdown to bring the score 58-44.

A Lopez interception with 1:30 left in the game and big yards by Perkins set up Pearson for an easy 20-yard run to bring the Vikings up 64-44.

Mogollon answered with their own touchdown, but couldn’t move past the Vikings, who brought home the win 64-52.

During the semifinal game, Pearson ran the ball 22 times for 171 yards, Lopez followed with 16 carries for 144 yards. Lopez had 100 yards receiving with Perkins bringing in another 100 yards. Diego Pedraza had four touchdown passes and went nine for 12.

Superior is walking into the championship game 9-1, seeded third in 1A. The Panthers only loss was to Mogollon earlier in the season.

The Vikings have an 8-2 record and were seeded fourth in 1A. The team had two losses this season, one to Bagdad and one to Mogollon.

Brownlee said last year was a disappointment, but said the 2017 Vikings are more mature and bring more experience to the game.

“It should be an electrifying experience,” he said. “We are wiser and I expect us to perform well.”

The Vikings faced Superior in the semifinals in 2016 where the Vikings came out on top in an overtime win.

“Superior has the same coaching staff and we have a little more knowledge of what to expect,” Brownlee said.

Brownlee said Superior’s strength lies with their quarterback, who is a multitooled player.

“Their quarterback is the focal point of their offense,” he said.

Brownlee said the strength of the Vikings lies with the unity of the team.

“You just never know who has the hot hand on our team,” he said. “We are consistent at running the ball and our passing game has gone well this year.”

Brownlee said the Vikings are excited to get back down to the state championships again.

“They can’t wait to get back and come home with a victory,” he said.

Brownlee said he hopes to see many of the Williams fans at the game to support the team.

“The more the merrier,” he said. “The high school is one of the focal points of the community and we want to represent the community 110 percent.”

Kickoff for the state championship game is 6:30 p.m. Nov. 10 at Maricopa High School.

Williams High School is providing a rooter bus and encourages any community members to sign up for the bus at the high school office.