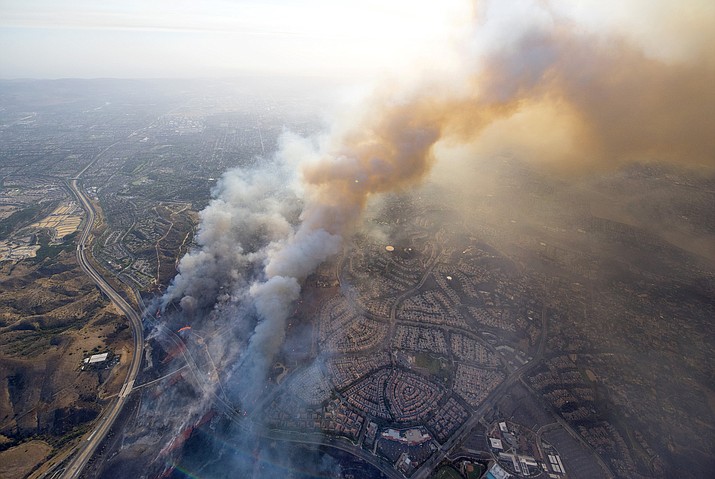 An Oct. 9, 2017 file photo shows a wildfire moving closer to North Tustin homes along the 261 freeway in Tustin, California.

Responding to deadly wildfires in California and the West, House Republicans on Nov. 1 passed a bill to allow faster approval for logging and other actions to reduce the risk of fire in national forests.

The House voted 232-188 to loosen environmental regulations for forest-thinning projects on federal lands. The measure now goes to the Senate.

House Speaker Paul Ryan said the bill was needed to protect the nation’s forests “from the kind of devastation that California experienced.” The GOP bill “will help us stop forest fires before they occur,” said Ryan, R-Wis.

Republicans and the timber industry have long complained about environmental rules that block or delay plans to cut down trees to reduce fire risk. Democrats and environmentalists say GOP policies would bypass important environmental laws to clear-cut vast swaths of national forests, harming wildlife and the environment.

The GOP bill is one of at least three being considered in Congress to address wildfires and solve a longstanding fire borrowing problem that forces officials to take funds from fire prevention programs to put out increasingly dangerous wildfires.

The legislation comes as the Forest Service and other federal agencies spent a record $2.9 billion battling forest fires in one of the nation’s worst fire seasons. Wildfires have burned nearly 9 million acres across the country, with much of the devastation in California, Oregon and Montana.

At least 43 people were killed in a series of wildfires in California last month, and firefighters have been killed in Montana, Oregon and other states.

The House bill’s sponsor, Rep. Bruce Westerman, R-Ark., said the fires show “how years of unmanaged federal forests have wreaked havoc on our environment, polluting our air and water and destroying thousands of acres of wildlife habitat.”

He and other Republicans say proactive management of forests — including prescribed burns, salvage logging of dead trees and projects to cut small trees and underbrush — reduces the risk of wildfires and lessens the severity of fires that occur.

Democrats say they support responsible projects to prevent fires, but accuse Republicans of using the current fires as an excuse to undermine the National Environmental Policy Act, Endangered Species Act and other laws.

House Republicans “know the bill has no future in the Senate and are pushing it anyway as a purely ideological exercise,” Grijalva said.

The Trump administration said it appreciates the intent of the bill, but questioned a provision aimed at solving the fire borrowing issue. As written, the bill would force firefighting agencies to compete for emergency funding with other natural disasters such as hurricanes, the White House said in a statement.

The White House said it supports a separate emergency fund for wildfires, an approach also taken in a bipartisan bill led by Western senators.